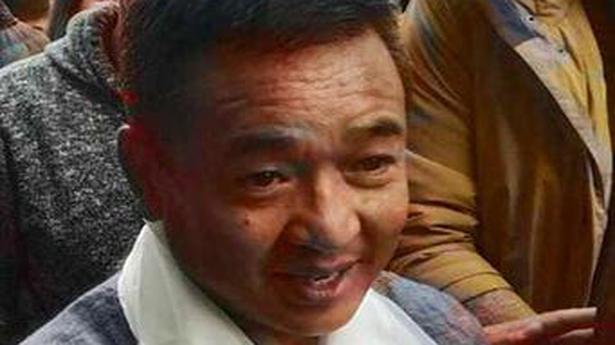 A day after the Election Commission reduced his disqualification period, Sikkim Chief Minister P.S. Golay on September 30 filed his nomination to contest bypolls from the Poklok-Kamrang Assembly constituency in the State.

The ECI on September 29 reduced Mr. Golay’s disqualification period from six years to one year and one month, making him eligible to contest the bypolls. He was convicted in a corruption case and completed his one-year sentence on August 10, 2018.

“Today was the last day for filing nomination papers and our Chief Minister filed them for contesting from Poklok-Kamrang Assembly seat,” Jacob Khaling, spokesperson of the Sikkim Krantikari Morcha (SKM), told The Hindu.

Mr. Golay, president of the SKM, took oath as Chief Minister on May 27. The constitutional provisions required him to be a member of the Legislative Assembly in six months.

The bypolls for three Assembly seats in Sikkim including Poklok-Kamrang are scheduled on October 21. The other two seats are Gangtok and Martam-Rumte, where the BJP has fielded its candidates, in alliance with the SKM.

The issue of Mr. Golay’s conviction and a six-year period of disqualification for contesting polls had dominated the Sikkim Assembly poll campaign earlier this year. The SKM won 17 out of 32 Assembly seats, ending the 25-year-old rule of Pawan Chamling and his party Sikkim Democratic Front.

In August, 10 SDF MLAs switched sides and joined the BJP, making it the Opposition party in the State Assembly.

The Ministry of Home Affairs (MHA) has sent an advisory to all States and Union Territories asking them to strictly enforce the ban on e-cigarettes cleared by the Union Cabinet in September. The Prohibition of Electronic Cigarettes (production, import, export, distribution, storage and advertisement) Ordinance was promulgated on September 18. In a letter to Chief […]

The Campbell aqueduct, where river Krishna splits into two branches, is under flood water and the inflow exceeded seven-and-a-half lakh cusecs on Saturday morning. The aqueduct was inundated for the second time in the past decade, the last time being in 2009 when the inflow was nearly 12 lakh cusecs. According to the available literature, […]

Six research-centric, 10 teaching-centric varsities, among others, likely in the next three years

The State government plans to establish six research-centric, 10 teaching-centric universities and 34 autonomous educational institutions in three years for the effective implementation of National Education Policy 2020, Deputy Chief Minister and Minister for Higher Education C.N. Ashwath Narayan said on Thursday. He was speaking at a webinar on “National Education Policy – 2020: Making […]