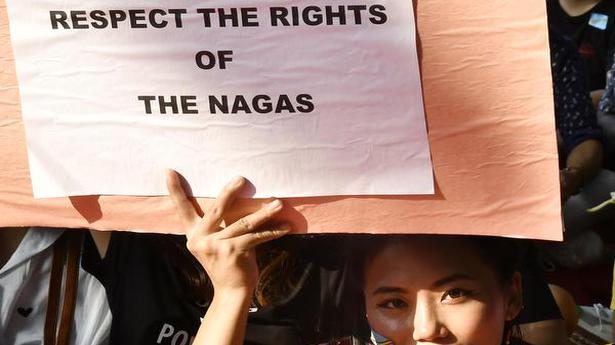 Arunachal Pradesh has echoed Manipur in demanding to be kept out of any “territorial changes” that might be incorporated in the settlement of the Naga political problem.

The Central government has been discussing with the Isak-Muivah faction of National Socialist Council of Nagaland (NSCN-IM) as well as a rival conglomerate named Naga National Political Groups for the “final solution” on the peace accord by October 31, a deadline purportedly set by Prime Minister Narendra Modi.

“The proposed agreement between the Centre and the NSCN-IM should not affect Arunachal Pradesh and its people in any way. We strongly oppose any attempt to change the territorial jurisdiction of the State or any kind of administrative intervention in the State while reaching the final solution,” said Hawa Bagang, the president of All Arunachal Pradesh Students’ Union (AAPSU).

Plea to all parties

The union has demanded that Pema Khandu-led BJP government should make its stand on the vexed issue clear. It also asked the three Members of Parliament from the State, all 60 legislators and the political parties to come together to protect the territorial integrity of Arunachal Pradesh.

The AAPSU’s message to Delhi is based on the NSCN-IM’s vision of Nagalim or Greater Nagaland that would entail redrawing of boundaries to bring all Naga-inhabited areas in the Northeast under one administrative umbrella.

The NSCN-IM’s map of Nagalim spreads over 1,03,473 sq km beyond the 16,527 sq km area of Nagaland. It includes much of eastern Arunachal Pradesh.

The outfit, as well as rival factions, claim these areas, primarily Changlang, Longding and Tirap districts are dominated by Nagas.

Union Home Minister Amit Shah will introduce the contentious Citizenship (Amendment) Bill, 2019 in the Lok Sabha on December 9. The Bill seeks to amend the Citizenship Act, 1955 by seeking to grant citizenship to undocumented and illegal non-Muslims from Bangladesh, Pakistan and Afghanistan who came to India on or before December 31, 2014. The […]

People’s life in Dharwad district that bore the brunt of torrential rain and floods in the last nine days is returning to normality as rain has subsided. Rainfall on Saturday and Sunday were comparatively less and it has helped recede the water levels in the rivulets, streams and tanks here. Floods that hit the district […]

Responding to BJP candidate Anand Singh’s mass mobilisation during the filing of his nomination papers in the Vijayanagar Assembly constituency in Hosapete on Monday, Basavaraj Rayaraddi, a Congress leader, said that mass mobilisation and the use of traditional music instruments did not necessarily mean that the BJP was a stronger party in the constituency. Speaking […]