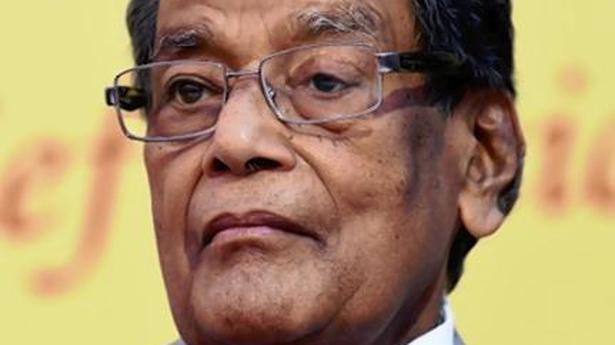 Attorney General K.K. Venugopal gave his consent to a law student on Tuesday to initiate contempt of court proceedings against artist Rachita Taneja for her tweets and cartoons.

Mr. Venugopal said the tweets and the cartoons that accompanied them were intended “to denigrate the Supreme Court and lower its authority in the eyes of the public.”

The first tweet concerning the bail granted to Republic TV editor-in-chief Arnab Goswami, according to Mr. Venugopal, gave an impression that the BJP was “somehow interested in protecting Arnab Goswami and has prevailed upon the Supreme Court to do so.” The implication was that the court was biased towards the BJP, Mr. Venugopal said.

“Therefore the clear implication would be that the Supreme Court is biased towards the ruling political party, the BJP, and would tailor its judgment for the benefit of the ruling party,” Mr. Venugopal wrote.

A second tweet, Mr. Venugopal said, carried the “gross insinuation” that the court had “ceased to be an impartial organ of the State.” The tweet was calculated to undermine the public confidence in the judiciary, he said.

A third tweet concerning the Ayodhya judgment was “highly objectionable” and “deliberately intended” to lower the authority of the institution, the top law officer said.

The Prime Minister’s meeting is expected to focus on a graded exit strategy from the 40-day lockdown. Source: thehindu.com Related