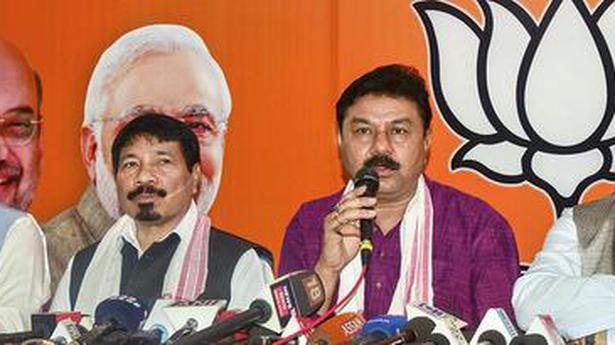 The Asom Gana Parishad, which returned to the NDA fold on Wednesday, and the BJP will not speak on the contentious Citizenship Bill while campaigning for the upcoming Lok Sabha polls in Assam, NEDA convenor Himanta Biswa Sarma said on Friday.

The two parties have decided to resume the talks on the Bill after the election, he added.

AGP, which had walked out of the North-East Democratic Alliance remonstrating against the Citizenship (Amendment) Bill, 2016, brought by the Centre two months ago, returned to the grouping on Wednesday.

“During the campaign, we will not say anything about our differences (on the Bill), but project our unity to the people,” Mr. Sarma said.

Both the parties would sit together after the polls to find out a solution through “consultation and consensus”, he added.

“The sole aim of our campaign will be to make Narendra Modi the PM again for the development of Assam and the Northeast. Our campaign will focus on the success of the PM and Chief Minister Sarbananda Sonowal’s tenure,” Mr. Sarma said.

There will not be a separate manifesto or common minimum programme for the constituents of the ruling coalition in Assam, he added.

A “common statement” approved by all the parties in the NEDA would be issued in the coming days, he said.

Commenting on the issue, Mr. Bora said, “We have decided to sort out the differences through discussion. We have joined the alliance in the greater interest of the State and country.”

He claimed that Mr. Modi had done “lots” of development work in the country, while former PM Manmohan Singh “did nothing” for the Northeast, despite being a parliamentarian from Assam for 10 years.

Mr. Sarma added that seat-sharing details would be formally announced on Saturday in New Delhi after a delegation of the regional party meets BJP president Amit Shah.

Kerala govt. may not grant clearance for prosecution in UAPA cases against CPI(M) activists

The Kerala government is unlikely to accord clearance for prosecuting two Communist Party of India (Marxist) activists, Alan Shuhaib and Thaha Fazal, arrested under the provisions of the Unlawful Activities (Prevention) Act (UAPA) from Kozhikode on Saturday. The two were accused of having circulated notices criticising the alleged encounter killing of four Maoists in the […]