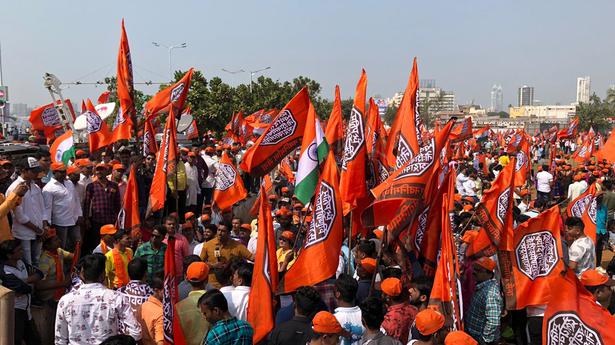 The Raj Thackeray-led Maharashtra Navnirman Sena (MNS)’s mega-rally in Mumbai to drive out ‘infiltrators’ from Bangladesh and Pakistan has reinforced speculation of covert support from the Bharatiya Janata Party (BJP) after MNS workers from Pune were seen travelling in a vehicle which bore the name of a BJP legislator from the Pimpri-Chinchwad area.

On Sunday, as droves of MNS activists set out from Pune and Pimpri-Chinchwad to participate in a massive rally called by Mr. Raj Thackeray in Mumbai’s Azad Maidan, some party workers were seen travelling in a luxury bus that bore the name of BJP leader and Bhosari MLA Mahesh Landge.

Some activists, who claimed to be BJP workers, said they were participating in the rally of their own accord and were seen travelling in buses from Pune along with the MNS activists.

Mr. Landge, on his part, denied that the BJP was providing vehicles for ferrying MNS activists and clarified that it was plausible that some activists may have hired a bus belonging to his personal transport firm.

“I own a transport business which provides buses and vehicles to other firms. It is quite likely that these [MNS] workers may have hired one such bus. Let me make it clear that this vehicle is not the BJP’s but owned by my transport company,” he said.

Speaking on BJP workers from Pune allegedly joining the MNS rally, Mr. Landge said he personally was not aware of any of his party activists participating in the event.

At the same time, he remarked: “But if indeed some BJP workers are participating in the MNS rally, it is for a good cause as our party has been fighting to bring about the CAA and implement the NRC.”

While top MNS leaders like Bala Nandgaonkar vehemently denied that the BJP was sponsoring their party’s rally, he said the MNS had not ‘invited’ any political party or outfit to join in the agitation.

“If members of other outfits and political parties are joining us in this rally, they are doing so because they know this cause taken by Mr. [Raj] Thackeray is a patriotic one,” he said.

After spiritedly campaigning against the BJP in the Lok Sabha election last year, the MNS’ change of ideological direction, symbolised by recent its adoption of a saffron flag incorporating Chhatrapati Shivaji’s royal seal or ‘Rajmudra’, has sparked talk of Mr. Raj Thackeray’s party inching ever closer to the BJP.

Mr. Raj Thackeray’s hobnobbing with BJP leaders such as Ashish Shelar is seen as an attempt on part of the MNS to seize the vacant Hindutva space following the ideologically opposed alliance of Uddhav Thackeray’s Shiv Sena with the Nationalist Congress Party and the Congress to keep the BJP out of power in Maharashtra.

The mega-rally is being seen as another attempt by Mr. Raj Thackeray to rebuild his party’s sagging fortunes in the State, which has been on the wane since 2012.

Despite notching impressive performances in the 2012 polls to the Pune and Nashik civic bodies (being once the dominant power in the Nashik Municipal Corporation), internal bickering and haphazard campaigning has caused the party to implode with many among its top brass defecting to the ruling BJP or the Sharad Pawar-led NCP.

While MNS activists congregated in Mumbai from all parts of the State, the largest droves of party workers came from Nashik and Pune.

Mr. Raj Thackeray’s decline and fall commenced with the MNS’ twin debacles in the 2014 Parliamentary and Assembly elections which left the party in utter disarray.

Its woes were compounded following its total rout in the civic polls held in February 2017, causing many to write off Mr. Raj Thackeray — and the MNS — as a major political force in the State.

While his party did not contest the 2019 Lok Sabha election, Mr. Raj Thackeray’s spirited campaigning for the Congress and the NCP in the general election this year had come a cropper, with the BJP-Sena candidates winning with huge margins in the very constituencies that the MNS chief held his rallies.

Chief Minister B.S. Yeddiyurappa on Monday promised to develop the Sapthamatruka Deviramma Temple in K.R. Nagar taluk as a pilgrim centre. Speaking after inaugurating the ‘rajagopura’ of the temple, he had a word of praise for the natural beauty of the region and said he would allot the funds needed for development of the pilgrim […]

Union minister Harsh Vardhan has discredited the recent global reports claiming over one million deaths in India due to air pollution, saying such studies are only aimed at “causing panic”. The Minister of Environment, Forest and Climate Change is contesting the Lok Sabha polls from Chandni Chowk constituency in the national capital. In an interview […]

Two coaches of Lucknow-Anand Vihar train derail in UP