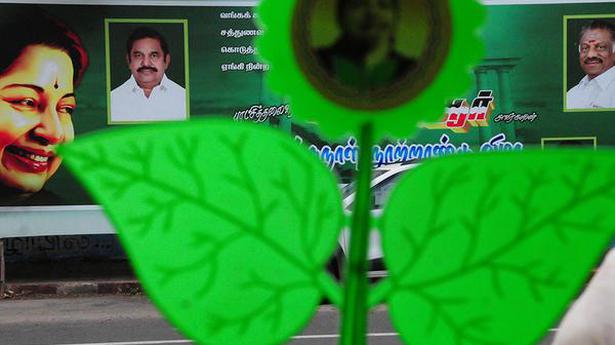 The ruling All India Anna Dravida Munnetra Kazhagam (AIADMK) that had won nine of the 10 Lok Sabha constituencies in southern districts in 2014 Lok Sabha election has chosen to give up majority of the Parliamentary seats by allotting them to its allies.

The party will contest only in three seats – Madurai, Tirunelveli and Theni – in the south that is considered to be its bastion for long.

Thereby, the ruling party will face its arch rival, Dravida Munnetra Kazhagam only in one seat – Tirunelveli – in the south. It will face Communist Party of India (Marxist) in Madurai and the Congress in Theni.

AIADMK’s ally, Bharatiya Janata Party has been given four seats in the southern districts including Kanniyakumari (held by Union Minister Pon Radhakrishnan) and Sivaganga, where the ruling national party will face the Congress.

The BJP will face Dravida Munnetra Kazhagam in Thoothukudi and Indian Union Muslim League in Ramanathapuram.

Another major alliance partner, Pattali Makkal Katchi that has not got a big base in the south has been given Dindigul. The DMDK has been allotted the Virudhunagar constituency as Virudhunagar is the native district of its founder Vijayakant.

The Tenkasi (reserved) Lok Sabha seat that comprises three reserved Assembly segments of Srivilliputtur, Vasudevanallur and Sankarankoil, has gone to Puthiya Tamilagam, where its founder, K. Krishnasamy is likely to contest.

The DMK will face Puthiya Tamilagam in Tenkasi and PMK in Dindigul.

DMK’s ally, the Congress will face the DMDK (Virudhunagar) and AIADMK (Theni), besides the BJP in Kanniyakumari and Sivaganga.

Impact of coronavirus will be felt for decades to come, says WHO. Source: thehindu.com Related

The Congress on Thursday wrote to Home Minister Rajnath Singh about a possible breach in Congress president Rahul Gandhi’s security in Uttar Pradesh when he visited Amethi to file his nomination on Wednesday. In their letter to Mr. Singh, senior leaders Ahmed Patel, Jairam Ramesh and Randeep Surjewala have asked the Centre to “probe and […]