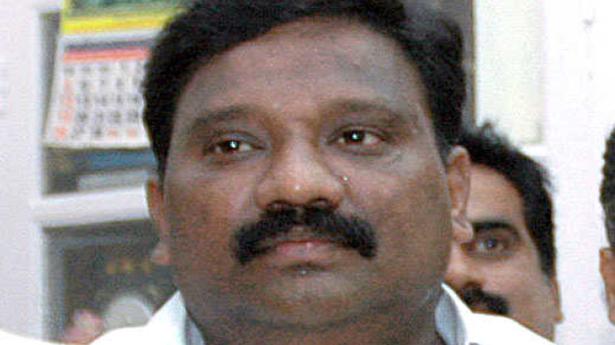 “AICC has approved the proposal sent by the general secretary (in-charge for Tamil Nadu) for taking stern disciplinary action against Karate Thiagarajan, for frequent anti-party activities and breach of discipline. Based on this, he has been suspended from the party with immediate effect,” K.C. Venugopal, AICC general secretary, said in a statement.

The trigger for the suspension seems to be his opinion expressed at an internal meeting of the Tamil Nadu Congress Committee (TNCC) recently that in the upcoming local body polls the party should contest on its own in at least 15 wards in south Chennai. This led to senior DMK MLA K.N. Nehru questioning the need for continuing the Dravidian party’s alliance with the Congress. The events seemed to push the two parties to the brink, barely a month after a very successful poll outcome in the Lok Sabha elections.

Early this month, Mr. Thiagarajan took a portrait of the late DMK president M. Karunanidhi to the TNCC headquarters without informing the party leadership and paid floral tributes on his birth anniversary. This ruffled many feathers within the TNCC.

Mr. Thiagarajan told The Hindu that he is waiting to find out the reasons for his suspension. The former deputy Mayor of Chennai said,”I am waiting for Mr. Chidambaram to come back from Delhi tomorrow and find out the reasons. A few TNCC leaders also called me and spoke to me asking me to remain silent for a while. I will know tomorrow what happened and will respond after that.”

Senior leaders in the party have been complaining about Mr. Thiagarajan’s activities in the recent past — he had earlier questioned why the DMK did not participate in significant measure in a protest organised by the Congress. Considering that he is close to film actor Rajinikanth, there is a view that he might join him as and when the latter launches his political party.

Mr. Thiagarajan has had a series of run-ins with the party’s leaders, including former TNCC president Su. Thirunavukkarasar recently, questioning how the latter could make statements that he had won his Lok Sabha seat on his own strength. Last year, Mr. Thiagarajan took on Congress’ national spokesperson Khushbu claiming that she was not a member of the party.

Chief Minister Manohar Lal Khattar may be old school, but he’s relying on technology to beat the twin threats facing the state. Besides the COVID-19 epidemic, Haryana also has to deal with harvesting the rabi crop amidst the lockdown. Khattar has set up multiple helplines for those seeking food supplies, for financial assistance to the […]

Kin of rape-murder victim in West Bengal to get compensation

The West Bengal government has decided pay a compensation of ₹4.12 lakh to the family of a 17-year-old girl who was allegedly gangraped and then burnt alive in South Dinajpur district earlier this week, a well- placed source at the State secretariat said on Saturday. The charred body of the teenager was recovered under a […]

This year, Delhi witnessed four deaths daily on average because of road accidents. Nearly half of these deaths — 44% — were hit-and-run cases, suggests the accident analysis report of Delhi Traffic Police with figures updated until May 15. The numbers are down from last year though. In 2018, 637 fatal accidents and 656 deaths […]