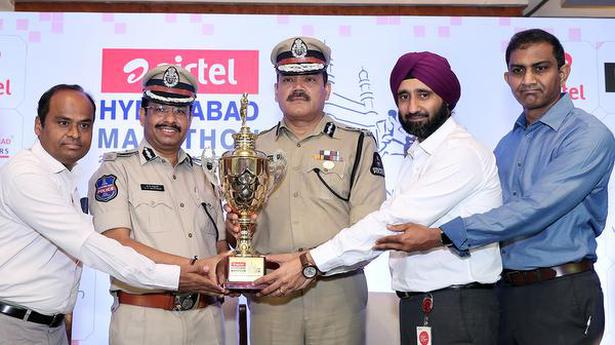 Hyderabad City Police Commissioner Anjani Kumar appealed to the organisers of ninth Airtel Hyderabad Marathon, to be held on August 24 and 25 here, to be part of a campaign to prevent the circulation of fake news.

Speaking at the unveiling of CXO Run Trophy to be given to the corporates as part of the marathon here on Tuesday, Mr. Anjani Kumar quipped saying even the best of the marathon runners may not be able to catch up with fake news, given the speed with which it gets circulated.

“It is not a bad idea to have banners all along the course of four categories of runs held as part of Airtel Hyderabad Marathon, one of the most prestigious events, to create massive awareness on the menace of fake news and measures to be taken to stop it,” he said.

“I was surprised to get a video recently which is 12 years old and shot in Chechnya. I mean, this is nothing but stupidity and I appeal to all the citizens not to simply forward any unauthenticated news and videos,” Mr. Anjani Kumar said adding that it was people’s collective responsibility to prevent the circulation of fake news. “Legal action will be taken against those who indulge in this, and it is important to nip this in the bud,” he said.

Cyberabad Police Commissioner V.C. Sajjanar also felt that the Hyderabad Marathon should be looked at as a medium to help make the city more popular for all the right reasons.

Abhijeet Madnurkar, race director of Airtel Marathon, said the ninth edition would feature a record number of 25,000 entries from across the world.

“We take pride in the fact that a total of 4,000 runners from different cities of India and many from African countries will be taking part in the marathon, which has a total prize money of ₹15 lakh across three categories,” he said.

Avneet Singh Puri, CEO of Airtel (A.P. and Telangana), said it was a privilege to be a part of the marathon, which is also into charity work. “I am glad that ₹35 lakh was raised for this last year and I hope it would be much more this time,” he said.

Murali Nannapaneni, president of Hyderabad Runners’ Society which organises the run, said they were committed to running and promotion of wellness. “We are happy that 31 NGOs are taking part in this edition of the run and thankful to the sponsors, including KLM Fashion Mall and others, for making it a huge success,” he said.

Only 16% of children in Class 1 in 26 surveyed rural districts can read text at the prescribed level, while almost 40% cannot even recognise letters, according to the Annual Status of Education Report (ASER) 2019, released by NGO Pratham on Tuesday. Only 41% of these children could recognise two digit numbers. However, ASER found […]

Thalassery Archbishop Mar George Njaralakatt on Monday warned that farmers would organise themselves and under no circumstances would they allow the property of any farmer to be attached by banks. He was addressing farmers who came from Kannur and Kasaragod districts to voice their grievances against neglect by the Central and State governments at an […]