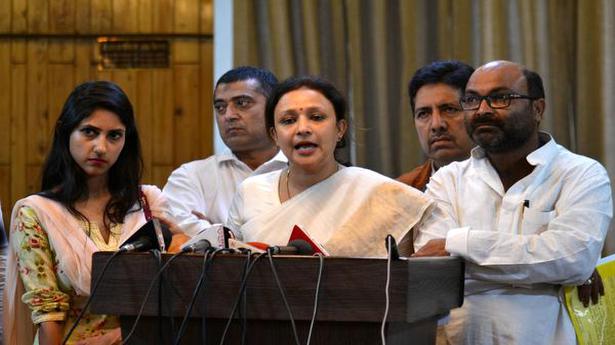 Mr. Lallu was the Congress Legislature Party (CLP) leader in Uttar Pradesh and is a two-time MLA from Tamkuhi Raj constituency. He is considered close to Priyanka Gandhi Vadra who is the party’s General Secretary (Incharge, Uttar Pradesh East).

Aradhana Misra ‘Mona’ has been appointed as CLP leader in place of Mr. Lallu.

Ajay Rai is the former MLA from Varanasi and Kidwai is a senior party leader.

An eight-member working group for strategy and planning for UP was also set up. Jitin Prasada, Rajiv Shukla, Rajaram Pal, Imran Masood and Brij Lal Khabri are among its members.

According to a party communication, the four vice presidents are: Virender Chaudhary (UP East), Pankaj Malik (West), Laliteshpati Tripathi and Deepak Kumar for the party’s frontal organisations such as NSUI and PYC.

An Uttar Pradesh Minister on a visit here on Thursday refused to meet the families of the two Muslim men who died in the recent protests against the new citizenship law, terming them “upadravi” (vandals). “Why should I go to vandals’ place? How can those who are involved in vandalism and put the entire country […]

Sabarimala case: SC reserves order on issue of reference of question of law to larger bench

A nine-judge Constitution bench of the Supreme Court on Thursday reserved its order on the legal issue of whether the top court can refer questions of law to a larger bench while exercising its review jurisdiction. A bench headed by Chief Justice S.A. Bobde said it will pronounce the order on February 10 and will […]