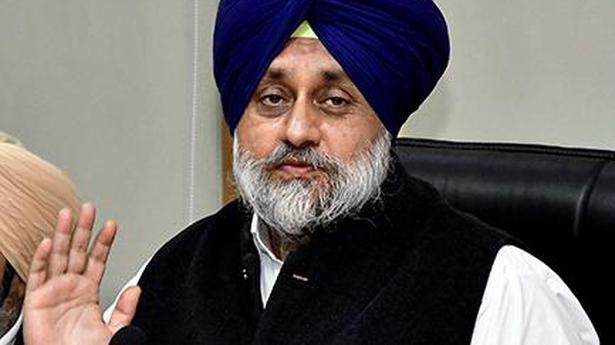 The Shiromani Akali Dal (SAD) chief Sukhbir Singh Badal on Sunday appealed to Punjabis to support the ‘Bharat Bandh’ on December 8 called by farmer unions against the new farm laws.

Mr. Badal also said his party would work assiduously alongside the farmers to ensure repeal of the agri-marketing laws.

Stating that “the fight for justice” had now become a fight of the ‘annadaata’ (someone who provides food) against the Central government, he said, “I am confident that the mass agitation will force the Centre to ‘bow down’ before the demands of farmers.”

In a statement here, Mr. Badal said it was unfortunate that the Central government was “dragging its feet” and “deliberately delaying” in taking a decision on the demands of the farmer organisations.

He said farmers had been protesting against the three farm laws for the last three months and were now holding a sit-in at the Delhi borders for the past 11 days.

“Besides elderly, women and children are part of the protest. It is extremely unfortunate that the Centre has refused to listen to the voice of the ‘annadaata’ and is making them suffer in the biting cold out in the open,” the SAD chief said.

Asking the Centre to make an “immediate course correction”, Mr. Badal said it was not right on its part to “forcibly” impose the three agri-marketing laws on farmers.

“Today is an important day for Atmanirbhar Bharat,” he said. Source: thehindu.com Related

The Haryana assembly elections have thrown up striking similarities with the 2009 polls — a hung House and a ruling party falling exactly six seats short of the majority mark. In the 2009 assembly elections, the ruling Congress won 40 seats, the same as the BJP this time. The Indian National Lok Dal, the main […]