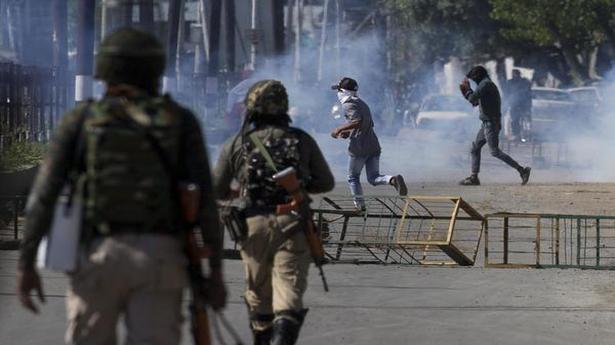 Global terror outfit al-Qaeda has announced a new chief for its India-specific wing Ansar Ghazwat-ul-Hind (AGH), two weeks after its top commander Zakir Musa was killed in an encounter in Pulwama’s Tral.

Hameed Lelhari alias Haroon Abbas will replace Musa and Ghazi Ibrahim Khalid will be his deputy, Abu Ubaidah Hafizahullah, a spokesman of the group made these claims in an 11-minute video released on the outfit’s official media handle al-Hurr on the occasion of Id.

AGH chief Musa was killed in an operation on May 23 in Pulwama’s Tral. He had replaced slain militant ‘commander’ Burhan Wani in 2016 but quit the Hizbul Mujahideen. His name first appeared in an Arabic publication close to al-Qaeda in May 2017.

The police suggested that the new chief Lelhari, 30, comes from a poor background unlike Musa and is a resident of Pulwama’s Lelhar area. He received his earlier education from the Evergreen Public School Lelhar and dropped out of the school in Class 8th. The police records suggest Lelhari took up small time jobs line labourer, cook and mason “to meet his two ends”.

Interestingly, his name did not figure in the top ten wanted militants complied by the Union home ministry recently.

Hours after the declaration about the new AGH chief, Al-Qaeda in the Indian Subcontinent (AQIS) spokesman Usama Mahmood in another audio praised Musa, in a bid to show global militants sympathy with him. This audio was released by the outfit’s as-Sahab Media group.

“Every militant in Afghanistan is saddened and mourning the killing of Musa. We are with our Kashmiris brothers in this time of grief and pray that may Allah accept his martyrdom, may Kashmir have many more Zakir Musas. Also, Muslims in Kashmir and other Muslims should take ahead the mission of Zakir Musa, Burhan Wani and Afzal Guru,” the spokesman said in the purported message released online.

Al-Qaeda social media platforms have also released a video on militant Faisal Ishfaq Bhatt, a resident of Srinagar and apparently in Afghanistan nowadays. “Jehad in Kashmir is no different than jehad in Afghanistan. The al-Qaeda in the Indian Subcontinent is counseling Afghan Taliban and also many jihadis in Kashmir. Mujahideen and leaders of the AQIS are eager to meet their brethren in Kashmir. They will launch attacks on oppressive army and police,” the speakers, identified as Bhatt, says.

It also criticised the role of Pakistan and its intelligence agencies for its “U-turn on Kashmir”. Bhatt praised Parliament attack mastermind Ghazi Baba, Ilyas Kashmiri and Ahsan Aziz for “abandoning Pakistan sponsored jihad”. Bhatt claimed to have joined militancy in Kashmir in 1990s and was first trained in Bandipora by Ghazi Baba.

A Delhi court on Thursday reserved order on Robert Vadra’s anticipatory bail plea for April 1 and extended his interim protection from arrest till then in a money laundering case. The Enforcement Directorate (ED) had sought the custodial interrogation of Mr. Vadra, brother-in-law of Congress president Rahul Gandhi, before Special Judge Arvind Kumar. Mr. Vadra, […]

T.N. Seshan, as Chief Election Commissioner during 1990-96, had initiated the process of cleaning up the electoral system. The introduction of electors’ photo identity cards was a measure towards this direction. He also saw to it that the model code of conduct, till then considered a document of academic interest, was taken seriously by the […]