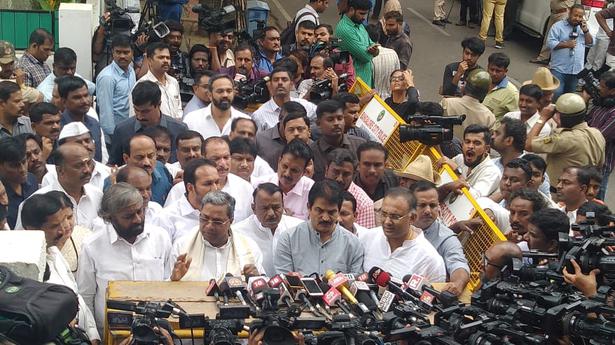 In an attempt to save the Karnataka government, all 21 Ministers from the Congress have voluntarily resigned from the Cabinet. This is to enable the reconstitution of a fresh Cabinet by accommodating disgruntled MLAs.

Announcing this on July 8 after a marathon meeting with Congress Ministers and senior party leaders, AICC general secretary K.C. Venugopal said that it was in the larger interest of the party.

“They have resigned voluntarily and have entrusted the party to take necessary decision to reshuffle the government in the present scenario. I sincerely thank the Ministers for their sacrifice for defeating the anti-democratic attitude of the BJP.”

Appealing to the rebel MLAs to come back, he said: “We believe in the MLAs and we are ready to discuss everything. Those who resigned should come back and strengthen their own party. We are confident that they will come back and that this government will continue.”

Coming down on the BJP for indulging in horse-trading, Mr. Venugopal said: “They have done in Telangana, West Bengal. They want to destabilise the government and get Rajya Sabha majority as well. We strongly believe in the strength of the party in Karnataka and we are confident this government will continue.”

He said that for the last five years, the BJP’s “anti-democratic attitude” was evident and “after this election victory it had become more”.

“Some Congress and JD(S) MLAs have grievances and are demanding Cabinet expansion. For the larger interest of the party we held a detailed discussion with the leaders and met Ministers. The Ministers themselves voluntarily resigned from the ministership,” he said and claimed that this was the “BJP’s sixth failure to destabilise the government.”

Coordination committee chairperson Siddaramaiah said those who were not happy that they were not given berth would be accommodated now. “It is total reshuffle. New Ministers will come and some existing Ministers might be retained. Except for Independent MLA R. Shankar, all the 21 Ministers have resigned. A few who were unable to attend the meeting today will also send their resignations to the party,” he said.

“The BJP does not believe in parliamentary democracy. They are always against democracy, not only in Karnataka but in West Bengal, Telangana and Andhra Pradesh. We will fight legally and politically. We are requesting the MLAs to come for a dialogue,” Mr. Siddaramaiah said.

“We are confident that those who are disciplined and loyal will come back to us. We will take all legal remedies and measures against the BJP.”

In the 2018 Karnataka elections, the people had not given a mandate for the BJP to come to power. Under the circumstances people gave a mandate for the Congress and the JD(S) put together. “105 is not 113, they cannot form the government,” he added.

As the second phase of polling begins for the 2019 General elections, 14 constituencies in southern Karnataka will go to the polls on April 18. Despite the shortage of time and daunting heat, there was an intense campaign, especially in the last fortnight. Raids by Income Tax officials on close associates of candidates of the […]

Expelled BJP MLA Kuldeep Singh Sengar, an accused in the Unnao rape case, was lodged in the lock-up at Tis Hazari court when the clash between lawyers and police personnel broke out last week, officials said. Besides Sengar, there were around 140 other undertrials in the Tis Hazari lock-up when the clashes took place, they […]

Syed Ali Shah Geelani — the hawk fades into the sunset

Ninety-year-old Geelani is an ideologue and a proponent of the merger of J&K with Pakistan. Source: thehindu.com Related