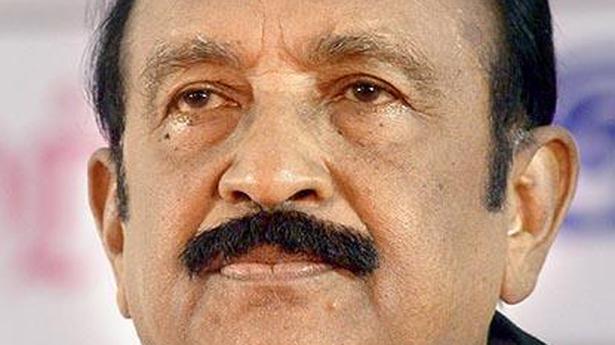 It is the duty of every citizen to prevent the Bharatiya Janata Party from retaining power at the Centre, Marumalarchi Dravida Munnetra Kazhagam (MDMK) general secretary Vaiko said.

Talking to reporters in Dindigul on Sunday, he said the BJP would not win more than 130 seats in the upcoming Lok Sabha election.

When asked how he could join hands with the Congress after having accused the party of having a role in the massacre of Tamils in Sri Lanka during the civil war in 2009, he said, “The BJP is posing a danger to the country by attempting to jeopardise secularism and thus making life difficult for the minorities. The BJP is promoting the ‘one nation, one culture’ ideology of the RSS. Since this is dangerous and should be stopped, we have allied with the Congress.”

Later in the day, over 20 BJP workers were held when they tried to show black flags to Mr. Vaiko.

The Communist Party of India (Marxist) has asked the district administration to conduct a high-level inquiry into the alleged land grabbing in Etcherla constituency where property prices are skyrocketing following rapid industrialisation. Party district secretary Bhaviri Krishnamurthy, CITU State vice-president D. Govinda Rao and others, who participated in an agitation at Chilakapalem of Etcherla constituency […]

None of the SP, BSP and Congress members were present in the House because of the opposition boycott of the proceedings against the suspension of eight MPs. Source: thehindu.com Related