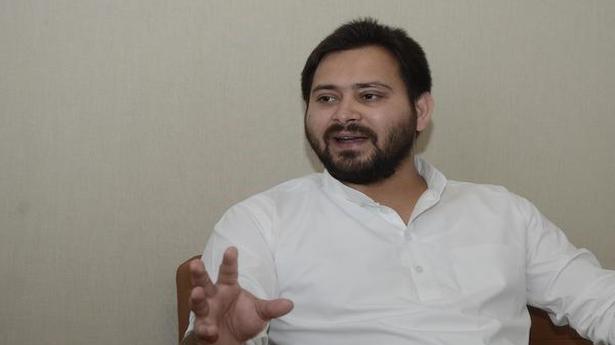 After much speculation and hectic parleys between ”mahagathbandhan” (grand alliance) constituents, Rashtriya Janata Dal leader Tejashwi Yadav on Wednesday said everything was all right in the alliance and seat share will be announced after Holi.

“The ‘mahagathbandhan’ is intact…there is nothing to worry about as everything is fine among us…seats and constituencies will be announced after Holi,” Mr. Yadav told journalists after reaching Patna from Delhi in the afternoon.

Mr. Yadav had been camping in Delhi for the last several days and meeting leaders of constituent partners to reach a final agreement on seat share.

On Tuesday night, he met Congress leaders and also had a conversation with that party president Rahul Gandhi.

Party sources told The Hindu that the eight-minute talk between Mr. Gandhi and Mr. Yadav finally broke the stalemate, and the final figure on seat-sharing was stamped.

The RJD would contest in 20 seats, while the Congress would be in fray in nine of the total 40 Lok Sabha seats in Bihar, the sources said.

The rest of the seats will be distributed among other constituents such as the Upendra Kushwaha-led Rashtriya Lok Samta Party, the Jitan Ram Manjhi-led Hindustani Awam Morcha (Secular), the Mukesh Sahni-led Vikassheel Insan Party and the Sharad Yadav-led Loktantrik Janata Dal.

Earlier in the day, State Congress president Madan Mohan Jha said Mr. Yadav had been authorised to announce the seat-sharing.

Situation on borders with China under control: Army chief

Gen. Naravane said that they were in talks with the country, starting with Corps Commander level and followed up with meetings at the local level between commanders of equivalent ranks Source: thehindu.com Related

The Janata Dal (U) reacted with some relief to Union Home Minister Amit Shah’s statement to a television channel that his party would go into the Bihar Assembly polls in 2020 under the leadership of Chief Minister Nitish Kumar, ending all speculation that the BJP was mulling its options. Bihar Minister and JD(U) leader Sanjay […]

Prime Minister Narendra Modi on April 10, 2020, remembered Jesus Christ on Good Friday, saying he devoted his life to serve others. Also read: Pope guides locked-down world through virtual Easter “Lord Christ devoted his life to serving others. His courage and righteousness stand out and so does his sense of justice,” Mr. Modi wrote […]