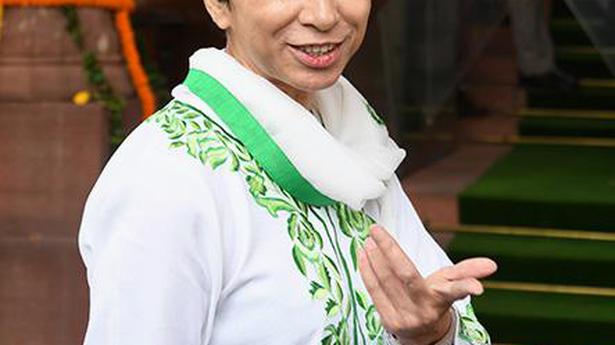 Haryana’s Ambala Lok Sabha constituency is set to witness a contest between former two-term MP Kumari Selja of the Congress and the incumbent, Rattan Lal Kataria of the BJP, for the third time since 2004.

Ambala, a Scheduled Caste reserved constituency, has traditionally seen a direct contest between the Congress and the BJP or its earlier avatar, the Jana Sangh, since 1967. Aman Kumar Nagra of the Bahujan Samaj Party in 1998 was the only non-Congress, non-BJP candidate to have won the seat.

Currently a Rajya Sabha MP, Ms. Selja had defeated Mr. Kataria on both the earlier occasions in 2004 and 2009. This week, she kicked off her election campaign with a roadshow where she targeted her rival party for not fulfilling the promises made in 2014.

At a party meeting in Panchkula, Ms. Selija, who is a member of the Congress Working Committee, hit out at the BJP accusing it of bringing to a standstill the development work started in the constituency by the previous Congress-led government. She also urged people to compare the development work carried out during her two previous stints as the Member of Parliament from Ambala.

In 2014, Mr. Kataria had won the seat by defeating Raj Kumar Balmiki of the Congress after Ms. Selja opted to not contest the election.

The BJP MP, who had won the seat for the first time in 1999, is banking on the development work done by him in the constituency as well as the “good performance’’ of the NDA government at the Centre and BJP government in the State.

Mr. Kataria, who on Friday filed his nomination, made it clear that he would focus on the achievements of the government headed by Prime Minister Narendra Modi, including the welfare work done for farmers and the poor. “Also, the BJP in Haryana has worked on the principle of ‘Sabka Sath, Sabka Vikas’. The State government has given a transparent and graft-free governance,” he told reporters.

Besides the Congress and the BJP, Rampal Balmiki of the Indian National Lok Dal, who has been a member of Yamunanagar Municipal Corporation for four terms, and Naresh Saran of the BSP-Loktantra Suraksha Party alliance are also in fray .

All 10 Lok Sabha constituencies in the State will vote in the sixth phase on May 12.

Close on the heels of a vertical split in the Kerala Congress (M), another splinter group of the regional party Kerala Congress (Jacob) too has plunged into crisis with two of its key leaders locked up in a fierce battle. The infighting within the party touched its boiling point on Thursday with party chairman Johnny […]

HAL has designs on a full LCA for Navy

After playing a prominent supporting role in the Light Combat Aircraft naval prototype’s tricky landing and take-off debuts from a Navy ship last week-end, Hindustan Aeronautics Ltd eyes the prospect of fully designing and developing a twin-engine fighter plane for the Navy if or when an occasion comes up. Asked what the successful twin acts […]