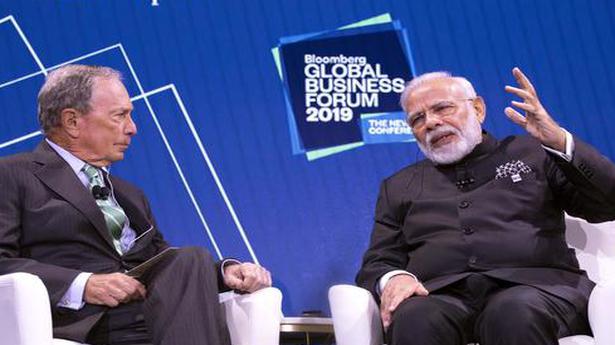 Top American CEOs are bullish about their companies’ future in India as they lauded Prime Minister Narendra Modi-led government’s pro-growth policies and his focus on providing a conducive business environment and ensure ease of doing business.

Mr. Modi interacted with 42 CEOs of top global companies during the CEO Roundtable here Wednesday immediately after he delivered the keynote address at the Bloomberg Global Business Forum.

The extensive agenda included harnessing investment opportunities in India and boosting commercial linkages between India and USA, his office said.

Following the meeting, Bank of America CEO Brian Moynihan said that it is always great to hear from the Prime Minister about his vision for India.

The American banking giant has been in India for several years and has 20,000 team mates who work in the country.

“We are there to help support the pro-growth agenda that says consistency in rules and regulations, ease of doing business, he said, adding that the bank’s clients and customers tell it they are more and more interested so I think that bodes well for the country going forward.

Shell CEO Ben van Beurden said Mr. Modi had a very “strong and impassionate ‘Come to India’ speech” and his four D’s of democracy, demography, demand and decisiveness are very powerful arguments to invest in India.

“We have already been convinced years before. We are in India, it’s a very important growth country for us and we continue to invest to be a leading international energy company in India. We are well on our way to meeting the Prime Minister’s expectations.”

Coca Cola Chairman and CEO James Quincey said India is a big market for the beverage giant and it likes investing in the country.

“We think it’s not just an important market for us, it’s the 5th most important and we think it’s going to become the third most important, he said adding that Coca Cola is very excited about continuing to invest in the country and be in line with the growth agenda for the government.

IBM CEO Ginni Rometty described the meeting with Mr. Modi as outstanding and said the Indian Prime Minister is an “authentic leader who genuinely listens to everyone’s input.”

She said she went into the meeting optimistic about India and came out “even more optimistic” about the country.

“His firm intent to continue to help with the ease of doing business is a win-win for both India and IBM,” she said.

Lockheed Martin CEO Marillyn Hewson said the meeting with Modi was excellent and he was more than willing to have a dialogue with the CEOs. She congratulated India on its pro-growth policies.

India and Sweden on December 2 signed three agreements that will help both countries to cooperate in the frontier of science and technology and address climate change and maritime issues. The agreements were signed after the Indian delegation held talks with the Swedish team led by King Carl XVI Gustaf and Queen Silvia who are […]

Prime Minister Narendra Modi on Thursday said Indian economy had the capacity to bounce back due to strong fundamentals and called upon everyone to work together and ‘start to think like a nation’. Mr. Modi was speaking at a meeting with various senior economists, venture capitalists and business leaders, ahead of the Union Budget 2020-21. […]