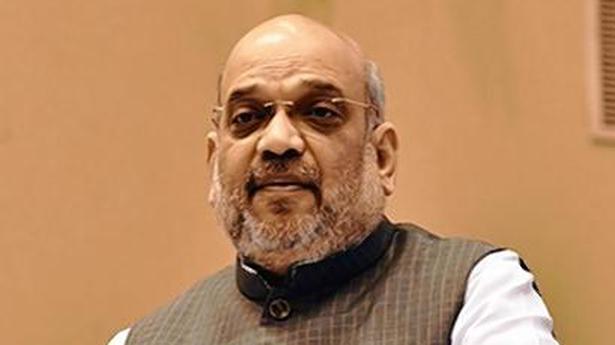 Union Home Minister Amit Shah said on Thursday that doctors, scientists and others should take up research to see that narcotic substances are not used in medicines.

At a conference on combating drug trafficking, organised for BIMSTEC partner nations, Mr. Shah said India has adopted a zero tolerance policy towards narcotics and the country’s measures to control it will be overhauled so that smuggling of drugs is stopped completely.

The “dirty money” obtained from narcotics trade is used for funding global terrorism and other transnational crimes, he said, adding “We will not allow drugs from any country of the world to enter into our country nor will we allow it to go out of the country.”

Union Home Secretary Ajay Kumar Bhalla said that the “large harvest of opium in Afghanistan has given added supply of heroin to Bay of Bengal nations”.

“The region has also become a transportation and consumption hub for lucrative cocaine that is being trafficked into BIMSTEC nations,” Mr. Bhalla said.

According to an official statement, Asian countries are increasingly being affected by drug trafficking and BIMSTEC, being the key link between south Asian and south-east Asian nations, is one of the most effective platforms to tackle this global threat.

Indo-Pak ties in 2019: From brink of war to corridor of peace

Pakistan and India were almost on the brink of war in 2019 following the Pulwama terror attack that killed dozens of CRPF soldiers and prompted India to carry out air strikes on terror camps in Pakistan, but the year ended on a somewhat positive note as they inaugurated a historic corridor to facilitate the visa-free […]

BJP Rajya Sabha member Y. Sujana Chowdary has assailed the style of functioning of the Y.S. Jagan Mohan Reddy government for reducing the administration to negating former Chief Minister N. Chandrababu Naidu’s decisions. Whether it was cancelling contracts, or taking measures to deal with the flood situation, the YSRCP government was acting only to oppose […]

The Anti-CAA NRC Students’ Movement here on Wednesday urged the YSRCP government to convene a special session of the State Legislative Assembly and pass a resolution against the Citizenship Amendment Act(CAA) and the National Register of Citizens (NRC). Dig at Jagan Chief Minister Y.S. Jagan Mohan Reddy’s statement that his government was not in favour […]