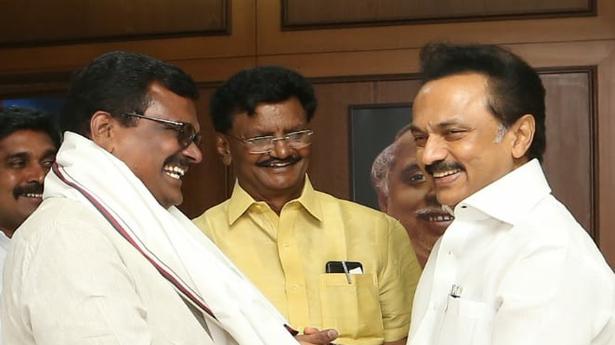 “He has proved the dictum of Anna that the flowers of the rival camp also have fragrance. He does not nurture animosity and it is explained by the recognition and elevation of former AIADMK leaders like E.Ve. Velu, P.K. Sekar Babu, T.M. Selvaganapathy and Senthil Balaji, who joined the DMK,” he told reporters after joining the party with his supporters at Anna Arivalayan.

In 2002, he had resigned as Andipatti MLA to facilitate Jayalalithaa to get elected to the Assembly from the seat.

Mr. Tamilselvan said a political party headed by a single leader alone could offer proper leadership and the AIADMK, after the demise of the late Jayalalithaa, was under the control of multiple leaders and was not able to take any decision.

“The party is controlled by the BJP and I would not like to join the party at the expense of my self-respect,” he said, when asked whether he opted out of joining the AIADMK because of his rivalry with Deputy Chief Minister O. Panneerselvam.

He said even though the DMK lost the R.K. Nagar bypoll, Mr. Stalin had proved that his party alone could offer a stable leadership by winning a major victory in the Lok Sabha polls and Assembly bypolls.

Mr. Tamilselvan said more office-bearers from the AMMK would join the DMK and it would take some time for him to organise a big meeting.

With a view to ensuring that government offices are ready to pay their power bills in pre-paid mode from June 1, the Southern Power Distribution Company Limited (SPDCL) has served notices on the heads of all departments to clear by May 10 their pending power dues, which have mounted to ₹ 8,000 crore. In a […]

One of West Bengal’s most significant leaders Chhatradhar Mahato, who emerged from non-mainstream politics and led a successful people’s movement, was released from jail on Saturday. He immediately went to his hometown in Lalgarh on the Bengal-Jharkhand border, an epicentre of the Maoist movement a decade back. Mr. Mahato, the main leader of the People’s […]

Narendra Modi ensured there is no corruption in country, says Hema Malini

BJP MP Hema Malini has said it will be dangerous for the country if Prime Minister Narendra Modi doesn’t return to power as he alone has the courage to do what is right for the country. The actor-turned-politician, who is recontesting from the Mathura Lok Sabha constituency in Uttar Pradesh once again this year, also […]