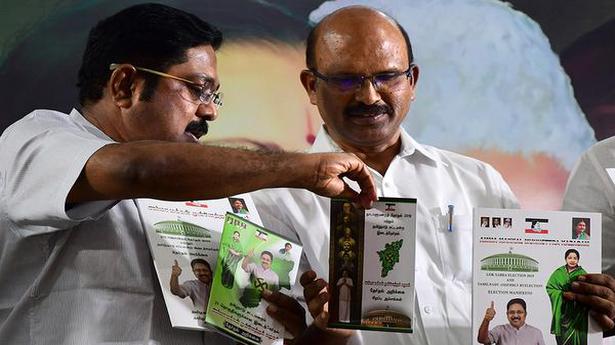 The Amma Makkal Munnetra Kazhagam (AMMK) has sought to address not only the concerns of farmers and weaker sections of society but also those of the middle class.

In its manifesto launched by deputy general secretary T.T.V. Dhinakaran on Friday, the AMMK promised a monthly subsidy of ₹100 per cylinder; “at least” 400 sq.ft. flats to employees of the private sector earning not more than ₹20,000 a month and interest-free loans of ₹2 lakh each to young men and women employees in the private sector for their marriage expenses.

Besides, a policy would be formulated to lessen the financial burden on the poor and middle class in the light of the hike in cable TV charges.

Not only agricultural loans taken by farmers from cooperative and nationalised banks but also “small loans” obtained by the poor and middle class from the cooperative banks for running trade establishments would be waived. Likewise, loans taken by students belonging to the lower strata of the society for their higher studies would be written off.

On the campuses of all arts and science, engineering, medical, agricultural colleges and polytechnics, students would be given free Wi-Fi facility and tabs. An annual assistance of ₹10,000 would be given to rural and poor girl undergraduate students.

Other promises include Amma rural banks and motels; establishment of a medical college for Muslim students and steps to re-open micro and small enterprises, which remained closed in the wake of demonetisation and introduction of goods & services tax.

The members of the Chennai City Meelath Committee on Sunday said that it accepted the Supreme Court decision on the Babri Masjid-Ram Janmabhoomi dispute and called for all the communities to live in unity. A resolution to this effect was adopted at a meeting held after the Milad-Un-Nabi procession organised by the Meelath Committee on […]

The operation department of the Guntur Division, South Central Railway, has mobilised ₹5.16 lakh from station masters, controllers, traffic inspectors, guards, pointsmen, TNCs, clerical staff and other officers to help those in crisis in the wake of the spread of COVID-19. Out of this, ₹1.82 lakh has been distributed to safaiwalas and private security personnel […]