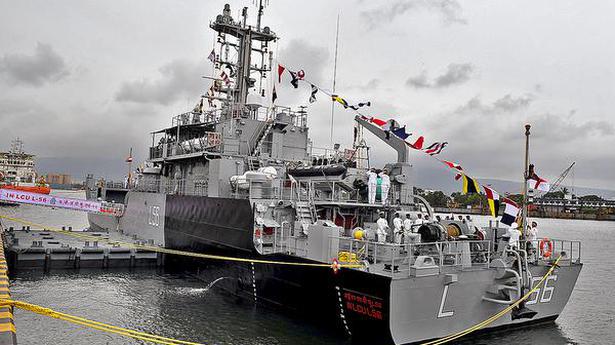 Commissioning the ship, the Vice-Admiral congratulated the GRSE (Garden Reach Shipbuilders and Engineers) for being the first shipyard in the country to have built the 100th warship.

“The induction of LCU 56 will add to maritime and HADR (Humanitarian Assistance and Disaster Relief) capability of ANC (Andaman Nicobar Command), as the ship will be deployed for multi-role activities such as beaching operations, search and rescue missions, disaster relief operations, coastal patrol, and surveillance operations along the Andaman and Nicobar Group of Islands,” he said. The inaugural address was delivered by Rear Admiral V.K. Saxena (retd.) CMD, GRSE, Kolkata, followed by Commodore Ashutosh Ridhorkar.

Based in Port Blair

Later, the commissioning warrant of the ship was read out by the Commanding Officer, Lt Commander Gopinath Narayanan. Subsequently, the Naval Ensign onboard was hoisted for the first time, which was followed by the ‘Breaking of the Commissioning Pennant’ with the national anthem being played in the background.

LCU 56 is an amphibious ship with its primary role being transportation and deployment of main battle tanks, armoured vehicles, troops and equipment from ship to shore.

The ship would be administered and based in Port Blair under the NAVCC in ANC.

With a displacement of 900 tonnes, the ship measures 62 metres in length and is fitted with two MTU diesel engines, which provide a sustainable speed of over 15 knots. The ship is equipped with the state-of-art equipment and is armed with two 30 mm CRN-91 guns manufactured by Ordnance Factory, Medak.

The ship is manned by a team comprising four officers and 56 sailors and is also capable of carrying 150 troops.

The Tripura government on Saturday started free distribution of pineapple and lemon juice so as to boost the immunity of people in urban areas with Vi Source: thehindu.com Related

The Belum Caves festival concluded on a grand note on Sunday at Kolimigundla mandal. A total of 721 artists, including 72 students, performed in the two-day fete. The Belum Caves Utsavalu – 2020 was held to promote the cave system, which is the largest cave system open to the public on the subcontinent extending about […]