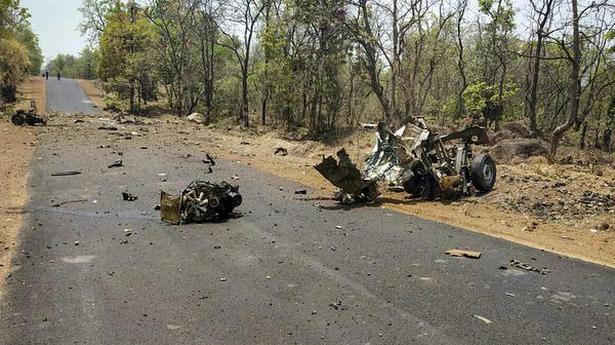 Soon after the Naxal attack on policemen in Gadchiroli on Wednesday, Union Home Minister Rajnath Singh spoke to Maharashtra Chief Minister Devendra Fadnavis promising all help and calling the attack an “act of cowardice and desperation.”

“Spoke to Maharashtra Chief Minister Devendra Fadnavis regarding the tragic incident in Gadchiroli and expressed my grief at the loss of brave police personnel. MHA is in constant touch with the State administration,” the Minister said.

Mr. Fadnavis said all help will be provided to the families of the jawans.

“I strongly condemn this attack and we will fight this menace with even more and stronger efforts in the future,” he said. The latest attack takes the total death toll of security forces in naxal-related violence in Maharashtra to 163 since 1991.

In 2015, an internal security report of the Maharashtra Police had assessed the security threat as ‘low’ after losing only two jawans, compared to 11 in the previous year, asking the forces to concentrate on the Southern parts of Gadchiroli.

However, a senior police official said enough intelligence inputs were available of a possible strike in the Northern parts during the Lok Sabha elections, sources said.

Denying any intelligence failure, Director General of Police Subodh Kumar Jaiswal said the attack was ‘indigenous’ and did not have support from any external organisation.

A 47-year-old official with a district cooperative bank in Sangli city in western Maharashtra has tested positive for COVID-19 and is said to be in a critical condition, said authorities on Sunday. With this, the number of positive cases in Sangli district, which has not seen a positive case in the past fortnight, has risen […]

Scores of volunteers from several Muslim organisations in Vellore staged a demonstration near the Anna Kalai Arangam on Tuesday. The protest was in continuance of their agitation over the attack by the Chennai City police on demonstrators in Washermenpet on Saturday. They raised slogans against the ruling AIADMK in the State and the BJP government […]

Chief Minister B.S. Yeddiyurappa on Monday promised to develop the Sapthamatruka Deviramma Temple in K.R. Nagar taluk as a pilgrim centre. Speaking after inaugurating the ‘rajagopura’ of the temple, he had a word of praise for the natural beauty of the region and said he would allot the funds needed for development of the pilgrim […]