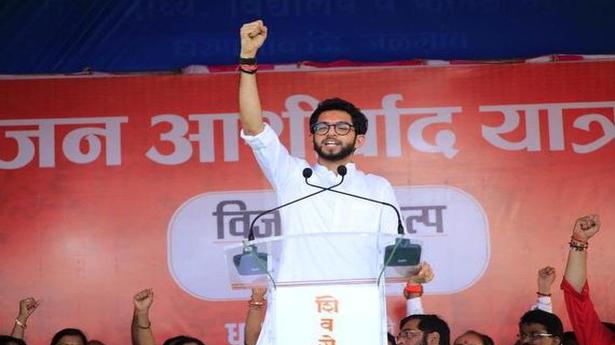 On Monday evening, Aaditya Thackeray (29), Shiv Sena youth wing leader and son of party president Uddhav Thackeray, announced his intention to enter the poll fray in Maharashtra from the Worli Assembly constituency. With that, he became the first Thackeray in three generations to fight a direct election, a move that reflects the changes within the party in the years following the death of its founder and supremo, Balasaheb Thackeray.

Mr. Aaditya Thackeray’s move comes at a time when the party has reconciled to playing the junior partner in the National Democratic Alliance in the State, after years of playing Big Brother. The Sena, after first sulking and breaking off the alliance with the BJP in 2014, has blown hot and cold at its partner, albeit kept the alliance afloat and shared the spoils of power. The young Thackeray’s decision to contest elections, comes under the rubric of such pragmatic ideas.

Since Bal Thackeray’s death in 2012, the Sena has been under the leadership of Mr. Uddhav Thackeray, who unlike his charismatic father has not developed a line of organic mass leadership in the party, like Chhagan Bhujbhal, Narayan Rane and Bhaskar Jadhav.

The shrinking of the Sena vis-a-vis the BJP has been a trend since the dawn of the Narendra Modi era in the BJP. In such a situation, not only has there been pressure from the outside to cede space but also changed the way leadership within the party could seek legitimacy. In the absence of a strong dominating charismatic leader, legitimacy of leadership could be sought from electoral victory, participating in government and setting up a patronage network that could circumvent tight control over the party apparatus.

The “remote control” government that Bal Thackeray ran between 1995-1999 in the State also had its share of problems with a change in chief minister, from Manohar Joshi to Narayan Rane being effected midway as it was felt that the former was not toeing the line as strictly as senior Thackeray would have wished. This is also an important factor in Mr. Aaditya Thackeray’s decision to contest polls, that you may press the buttons of the remote control but the commands may not be carried out.

The choice of Worli is also interesting. According to Dhaval Kulkarni, author of the well regarded book The Cousins Thackeray: Uddhav, Raj and the Shadow of their Senas, parts of the constituency also saw the birth of the role of North Indians in Mumbai politics.

“In 1951, Pandit Bhagirath Jha of the Socialist Party became the first North Indian MLA in the erstwhile Bombay Legsilative Assembly. He was elected from the Chinchpokli-Lower Parel-Love Grove constituency, parts of which are now in the Worli constituency,” said Mr. Kulkarni. The current constituency has BDD chawls, slums and an equal number of Marathi and non-Marathi speaking voters, apart from the glitter of the Worli sea face. “It reflects the changes in the Sena too,” he added.

Mr. Aaditya Thackeray’s entry into electoral politics is, therefore, not just another “son-rise” in the dynasty rife world of Indian politics, but a fundamental change in one of India’s oldest nativist parties.

The Cabinet has decided to sanction an emergency financial assistance of ₹10,000 each to the families affected by the floods, ₹10 lakh to those who lost their land and houses and ₹4 lakh for repairing houses that have become uninhabitable. Briefing reporters about the decisions of a Cabinet meeting here on Wednesday, Chief Minister Pinarayi […]

Return of migrants led to spike in Prakasam, says Collector