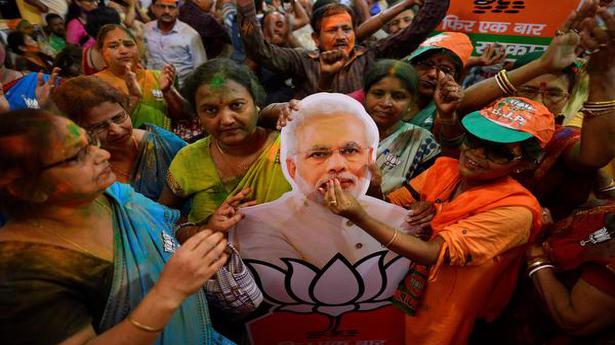 Here’s a quick look at the vote shares of the party since the 1984 elections. In previous elections, the party’s earlier avatar, the Bharatiya Jana Sangh had contested elections either separately or merged within the Janata Party (in 1977 and 1980).

The BJP led coalition (with the Shiv Sena, the Janata Dal (United), the Shiromani Akali Dal, the All India Anna Dravida Munnetra Kazhagam among others) won a cumulative vote share of nearly 45%, which is higher what the NDA got in 2014 – 38%.

In contrast, the Congress party has managed only a marginal improvement in its vote share from 2014 – by around 2.6 percentage points to gather 22.07% of the counted votes so far.

The BJP and its allies have thus far not only increased their respective vote shares and seat shares from 2014, but also expanded their geographic reach in electoral success. Only the southern States, such as Tamil Nadu, Kerala and Andhra Pradesh, have bucked the trend.

The dominant victory of the BJP and its allies — by repeating the 2014 win, and then some — suggests that the era of coalitions (and/or a central government with a relatively weak national party in power) determining the balance of power at Delhi has decisively come to an end. This period, which began in 1977 following the end of Emergency, extended till 2014 with the notable exception of the Congress rule (with PM Rajiv Gandhi at the helm) between 1984 and 1989.

We could now characterise the period when the BJP came to power in 2014 as the beginning of a new single party hegemonic system in Indian politics, that was akin to what prevailed since Independence during the days of the “Congress system”. The 2019 Lok Sabha election trends so far has clearly affirmed this.

The Unemployed | The Jobs Jigsaw

With the Lok Sabha election just months away, the leaked findings of the latest National Sample Survey Office (NSSO) report couldn’t have come at a worse time for the Narendra Modi government. The NSSO data shows that labour force participation has been decliningfrom 43 per cent in 2004-05, it came down to 40 per cent […]

A press briefing convened by former Minister and JD(S) MLA S.R. Mahesh on Wednesday was called off at the eleventh hour after poll officials issued a fresh reminder of the ban on public campaigning ahead of the December 5 polling in Hunsur. Public campaigning has been banned from 6 p.m. on Tuesday till the conclusion […]