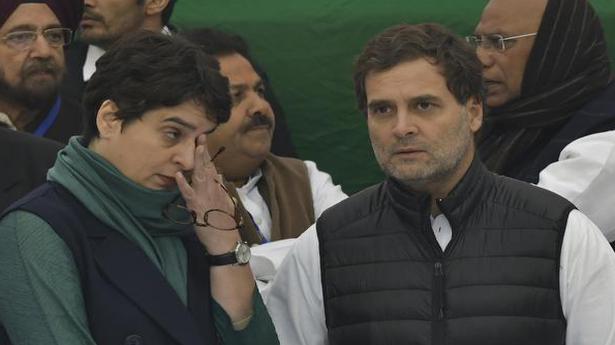 As the Congress party became part of yet another State government with the Jharkhand Mukti Morcha-Congress-Rashtriya Janata Dal alliance winning Jharkhand, a section of the Congress workers stepped up their demand to bring back Rahul Gandhi as their president.

At the Congress satyagraha against the Citizenship Amendment Act (CAA) and the proposed nation-wide National Register of Citizens (NRC), party general secretary K.C. Venugopal, known to be one of the closest aides of Mr. Gandhi, mentioned how the former president was the “only leader” who had almost singlehandedly taken on Prime Minister Narendra Modi and his government.

“He is the leader who is fighting against the anti-people government bravely. The government has filed 16 cases against Rahul Gandhiji for speaking the truth,” said Mr. Venugopal who seemed to have conflated the defamation cases filed by BJP workers against his leader with the Union government.

But his comments seem to be part of a narrative to relaunch Mr. Gandhi since his mother and party president Sonia Gandhi had agreed only to be the interim chief.

Though Ms. Gandhi is undoubtedly the most acceptable leader to every section of the party, she is reported to be reluctant to lead it over health concerns.

Even in the recent Jharkhand elections, Ms. Gandhi didn’t campaign at all for the alliance and it was left to her son and daughter, Priyanka Gandhi Vadra.

The common refrain among a few is that she may not be able to aggressively lead the party’s revival effort and someone younger should be left for the job.

That’s why a section of the party leaders like Mr. Venugopal and Chhattisgarh Chief Minister Bhupesh Baghel among others have started the bring back Rahul Gandhi project.

Even the December 14 rally of the party at the Ram Lila Maidan was a clear pointer of this project. From giant cut-outs to Mr. Gandhi’s speech being the centrepiece, it was clear that the Congress is now preparing ground for him to come back to take on the government.

But there is also a section within the party that is apprehensive. They not only believe that Ms. Gandhi is their lucky mascot — they cite better than expected results in Haryana, Maharashtra and now Jharkhand after the Lok Sabha rout but also privately question Mr. Gandhi’s political consistency and the tension between Old and Young Guard of the party.

Different sections of the party working at cross purposes, if not deliberate sabotage, was all too evident when Mr. Gandhi was at the helm of party affairs.

As the Congress party deliberates upon a leadership change, it must more sincerely follow what it criticises the BJP government of not practising sincerely: “Sabka Saath, Sabka Vikaas aur Sabka Vishwaas” or take everyone along, ensure everyone’s progress and earn everyone’s trust.

Nip it in the bud is mantra in Nalgonda

District Collector Prashant J. Patil on Thursday said that the strategy to fight COVID in Nalgonda would be specific, aimed at localised areas from wh Source: thehindu.com Related

As the Indian Air Force (IAF) continues its efforts to procure new fighter jets, the U.K. has made a pitch for cooperation in the fields of building aircraft carriers and future fighter aircraft technologies. “It is not a selling proposition. It is a partnership building exercise on how India and the U.K. can collaborate as […]

The government on Thursday introduced in Lok Sabha a bill to repeal 58 old laws which, Law Minister Ravi Shankar Prasad said, are a source of inconvenience and trouble for people. Opposition members accused the government of “rushing through” bills without giving lawmakers due time to deliberate on their content. Mr. Prasad said the Narendra […]