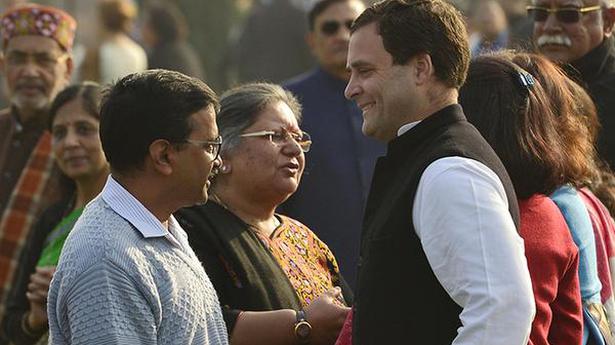 If politics is about making the right moves at the right time, then what would be its converse? Resorting to the disappearing trick when a particular situation demands the presence of a leader? Well, these questions are being asked of former Congress chief Rahul Gandhi’s absence in the aftermath of the January 5 violence at the Jawaharlal Nehru University.

From social media to TV channels to online portals, Mr. Gandhi’s absence was once again reported as a sign of his being a “non-serious” politician. The term “once again” is being used because the former Congress chief’s absence was also pointed out during the Delhi Police’s crackdown on students of the Jamia Millia Islamia University (JMIU) during the anti-Citizenship Amendment Act protests. It was then pointed out that Mr. Gandhi was on pre-scheduled visit to South Korea at the invitation of the government there.

True, during the violence at JNU, Mr. Gandhi did put out a strong tweet and called the attackers “masked thugs”, asserting that the “fascists in control of the nation are afraid of the voices of our brave students”.

But Mr. Gandhi did not go to the JNU campus on his return, which continued to be a matter of discussion for commentators. However, there is near total silence by commentators on why Delhi Chief Minister Arvind Kejriwal was missing from both JMIU as well JNU.

For a man who built his political career on agitations or dharnas or sit-in protests (one of the FM stations in Delhi labelled him ‘Dharna Kumar’), Mr. Kejriwal’s absence was eloquent.

He did tweet on speaking to Delhi’s Lieutenant-Governor about “restoring order”, but there was no ‘signature-style Kejriwal’ attacking the Delhi Police and the Union Government, or visiting JNU to express solidarity with students.

Though there is no official explanation as to why Mr. Kejriwal did not visit one of the most prestigious campuses in the city he is in charge of, reports suggest it could be on the advice of his election strategist Prashant Kishor.

The move was being viewed as an attempt to escape from being labelled as an “urban Naxal” and being part of the tukde tukde (‘split up India’) gang.

After all, JNU added to the nation’s and media’s political jargon with word tukde tukde during a protest, when Kanhaiya Kumar was the president of the JNU Students Union (JNUSU) in 2016.

The controversy revolved around a protest over the hanging of Parliament attack convict Afzal Guru, when slogans such as “Bharat tumhare tukde honge hazaar” (‘India will be disintegrated into a thousand pieces’) and “Azaadi” (freedom) were heard.

JNUSU explained that their protest had nothing to do with Afzal Guru and the slogans were about “aazadi” from social problems like poverty and illiteracy. Kanhaiya Kumar also claimed that the protests were carried out by “outsiders” and the slogans heard in the video clips were doctored.

But that didn’t cut much ice as not only did Mr. Kumar have to serve a jail term and get bashed up by lawyers for “leading the tukde tukde gang”, anyone who expressed solidarity with the JNU students were called anti-national.

Mr. Gandhi, reportedly on the advice of an aide who was a former Left activist in JNU, went on to express solidarity and became an honorary member of the “tukde tukde gang”, as the Bharatiya Janata Party put it.

With this background, Mr. Kejriwal perhaps did not wish to risk his political image ahead of the elections. And perhaps that also explains why Mr. Gandhi did not make a visit to the campus even on his return.

Congress to not send spokespersons to TV debates for a month

The Congress party on Thursday announced its decision not to send spokespersons and media panelists to take part in television debates. “.@INCIndia has decided to not send spokespersons on television debates for a month,” tweeted Congress communication chief Randeep Surjewala. “All media channels/editors are requested to not place Congress representatives on their shows,” he added. […]

Days after the U.S. Food and Drug Administration (FDA) banned surgical pelvic meshes — used to support the abnormal descent of the pelvis in women — following reports of adverse reactions, the Union Health Ministry has written to pharmaceutical giant Johnson & Johnson seeking information on the import, sale and stock of the product in […]

K.S. Alagiri says all is well with DMK alliance

After meeting DMK President M.K. Stalin on Saturday, Tamil Nadu Congress Committee president K.S. Alagiri said there is no problem between the two alliance partners and any differences had been sorted out. Mr. Alagiri met Mr. Stalin at Anna Arivalayam, as the recent tension between the two parties have been dominating the news. Mr. Alagiri […]