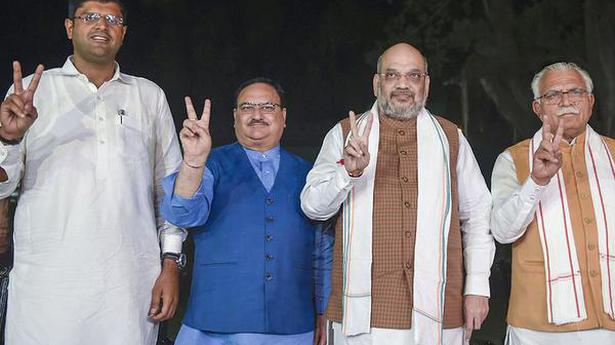 Jannayak Janata Party (JJP) leader Dushyant Chautala’s decision to ally with the BJP to shore up the latter’s numbers in the Haryana Assembly has evoked a mixed response, but neither is the event unprecedented nor without its own political strategy.

Criticism has been lodged at the doors of Mr. Chautala for seemingly going against the mandate of the Haryana elections, and allying with the BJP, and betraying the sentiment of the Jat community in doing so.

However, the move to ally with a party one opposed tooth and nail during the polls is hardly unprecdendented, with Haryana itself seeing former chief minister Bhupinder Singh Hooda cobble just such a majority in 2009.

The political logic for the alliance, for the JJP, goes beyond the Jat support base and on surviving the next five years with a group of 10 MLAs who may or may not get restive at being the less important opposition party.

The JJP was formed to assert Dushyant Chautala and his branch of the Devi Lal family tree as true legatees. With his father in jail, and his uncle, Abhay Chautala, crowding him out, Mr. Dushyant Chautala struck out on his own and has, fortunately, found some electoral success under his own banner.

When Mr. Dushyant first thought of splitting the party, his father, Ajay Chautala, advised him “not to be like Akhilesh Yadav (of the Samajwadi Party), and fight for things like the party symbol etc.” So a brand new entity was conceived and launched, the sustenance of which would be a tightrope walk going ahead.

Had Mr. Dushyant not aligned with the BJP — which was going to form the government anyway with the help of seven independents — he would have run into the risk of watching his own party split at some point in the future, with MLAs who may have sought greener pastures in the ruling party camp. This was the case in 2009, when five out of the six Haryana Janhit Congress (HJC) MLAs declared their support for Mr. Hooda’s government, quite against the wishes of their leader Bhajan Lal.

For Mr. Dushyant, aligning with the BJP was a politically logical move to become the medium through which patronage can be disbursed to his own MLAs.

The day after his alliance with the BJP was announced, his father Ajay Chautala was granted a furlough from Tihar Jail for two weeks, a reminder of the fruits of power.

The sale of George Orwell’s 1984 went up by 9,500 percent when Donald Trump took office. There is no figure available for India post 2014. Orwell saw the novel as a warning rather than a prophecy, but prophecies come true when warnings aren’t heeded. Who controls the present, he wrote, controls the past. Orwell is […]

Hydroponics, the process of growing plants without soil in a controlled environment, is receiving better patronage as Sri Venkateswara University’s(SVU) Department of Botany has embarked on a mission to train students and farmers the nuances of this emerging technology. The huge glass house built four decades back, now lying unused, is the hydroponics lab. Here, […]

ED to seek custody of Wadhawans in Yes Bank case

Kapil and Dheeraj are now in the Central Bureau of Investigation’s custody Source: thehindu.com Related