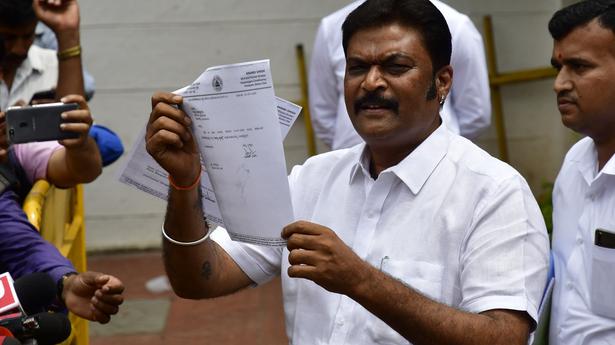 Three-time MLA Anand Singh, the Congress MLA representing Vijayanagara constituency in Ballari district, submitted his resignation to the membership of the Legislative Assembly on Monday, opposing the Kumaraswamy government’s decision to sell 3667.31 acres to JSW Steel in Ballari district, for mining purpose.

“I have placed my demand before the government. I will take my next decision after seeing the response from the government on executing lease-cum sale agreement on land to JSW steel,” Mr. Singh said after meeting Governor Vajubhai Vala at the Raj Bhavan.

Mr. Singh said he taken a decision to resign to the membership of the Assembly opposing the injustice meted out to the people of his district and the constituency.

Mr. Singh also urged the government to carve out Vijayanagara as a separate district from the present Ballari district.

The Cabinet had taken a decision to sell 3667 acres at ₹1.20 lakh per acre to the steel factory. In fact, several Congress leaders, including former Minister H.K. Patil, asked the government to scrap the decision in the interest of the State.

Following the Congress legislators’ opposition, a few days ago, the government has constituted a Cabinet Subcommittee headed by Home Minster M.B. Patil to look into the issue. Mr. Patil said the committee would hold its first meeting on coming Thursday.

The then (2006-07) JD (S)-BJP coalition government headed by H.D. Kumaraswamy executed the lease-cum-sale agreement with JSW steel. Recently, the JD (S)-Congress government has decided to sell the land to the factory.

Ahmedabad event to welcome Trump will be historic: Narendra Modi

UDF in a quandary over Kerala Congress(M) row

The escalating factional war within the Kerala Congress(M) has entered yet another delicate phase with the rival groups led by Jose K. Mani and party working chairman P.J. Joseph deciding to go their own way, putting the United Democratic Front (UDF) leadership in a quandary ahead of the local body elections in the State. With […]

A senior citizen was attacked by a gaur near Thirumoorthy Nagar in Udumalpet, Tiruppur district on Friday, forest officials said. C. Dhanabalan, Udumalpet forest range officer said that A. Kaalisamy (67) was attacked by the gaur when he was shepherding goats in the area. Mr. Kaalisamy suffered injuries on his hip and was admitted in […]