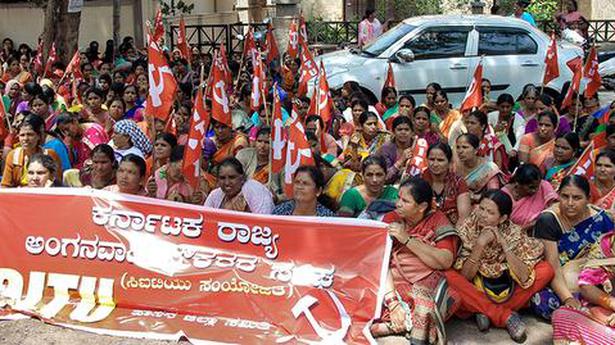 The Hassan district unit of Anganwadi Workers Association staged a protest here on Tuesday, demanding suspension of an officer of the Department of Women and Child Development, accusing her of harassing anganwadi workers. The protesters staged a dharna in front of the office of Deputy Director of the department and submitted a memorandum seeking suspension of Roopa, in-charge CDPO of Hassan taluk.

The protesters said the officer put pressure on workers to do non-designated works. A worker attempted to end her life because of the way she was treated in official meetings. They demanded that the officer be suspended and the department bear the expenses meted out to provide treatment for the harassed woman admitted to Hassan Institute of Medical Sciences.

Dileep can inspect memory card, but can’t have copy: SC

The Supreme Court on Friday allowed Malayalam actor Dileep, an accused in the kidnap of an actress and sexual assault on her two years ago, to either personally inspect the contents of a memory card containing visuals of the attack, in the court or seek a second opinion about its genuineness from an independent agency […]