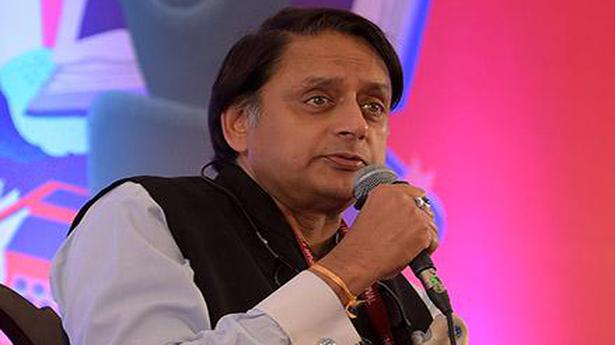 Senior Congress leader Shashi Tharoor on Sunday said the resolutions against the Citizenship (Amendment) Act, passed by several Assemblies recently, were “political statements” through which they had conveyed their apprehensions over the Centre’s intent behind linking nationality with religion. “The States want the Union government to know of their unhappiness,” he said.

Interacting with journalists at the Jaipur Literature Festival, Mr. Tharoor said the Centre should listen to the views of the States, as it would need their cooperation if it wanted to move forward from the CAA for preparing the National Population Register (NPR) and the National Register of Citizens (NRC).

“What will the Centre do if the States refuse to make their employees available for enumeration? The idea of mentioning dubious citizenship against names in the proposed NRC is purely the BJP’s creation… It is rightly being opposed,” the former Union Minister said.

The Thiruvananthapuram MP said Pakistan founder Muhammad Ali Jinnah’s victory would be completed if the CAA-led to NPR and NRC in which large sections of population would be deprived of their rights if they failed to prove their citizenship. “A choice between Jinnah’s idea of the nation and Mahatma Gandhi’s idea is still available to us. The BJP is justifying Jinnah’s logic through CAA.”

Mr. Tharoor said the enactment of the CAA and the BJP’s intention to bring in the NPR and the NRC amounted to fulfilment of Jinnah’s two-nation theory with which the Lahore resolution was passed in 1940. “From wherever Jinnah is, he would say he was right that Muslims were a separate nation and deserved a separate homeland because Hindus could not be just towards them,” he said.

The Congress leader said he had tried to stop the introduction of the Citizenship (Amendment) Bill in Parliament and spoken against it with a firm belief that religion could never be the basis for determining the citizenship. “Mahatma Gandhi and all of our freedom fighters believed that all religions were equal. Prayers from all religions were recited in Gandhiji’s meetings… Even if you are an atheist, this is your country.”

Asked about the Aam Aadmi Party government in Delhi giving subsidised electricity and water supply to the people, Mr. Tharoor said the Congress was in favour of giving revenue earned by the State to poor sections of society, who could not enjoy the benefits of economy. “If you give subsidies to the undeserving people, the State will go bankrupt,” he said.

Earlier, Mr. Tharoor’s latest book, “The New World Disorder and the Indian Imperative”, which he has co-authored with Observer Research Foundation’s president Samir Saran, was launched at a session at the JLF. The two authors conversed with Irish economist and writer David McWilliams at the session.

17 arrested for attacking officials in Moradabad

Uttar Pradesh Chief Minister Yogi Adityanath on Thursday instructed officials to recover the cost of damage to property from the persons accused of attacking health officials in Moradabad on Wednesday. “If they don’t [pay up for the damage], their property should be seized,” a government spokesperson said, quoting the Chief Minister. Three persons, including a […]

Security forces have busted a militant hideout in Baramulla district of Jammu and Kashmir and seized a cache of arms, ammunition and other items, including a satellite phone, police said on Sunday. The hideout was busted in Rafiabad area of Sopore in north Kashmir, a police official said. He said the recovery includes two AK […]

Jannayak Janta Party (JJP) leader Dushyant Chautala, who has emerged as kingmaker in Haryana, will be meeting his 10 legislators in Delhi on Friday to decide which party to support in order to form the next government in the state, sources said on Thursday. The Haryana Assembly poll verdict threw up a fractured mandate with […]