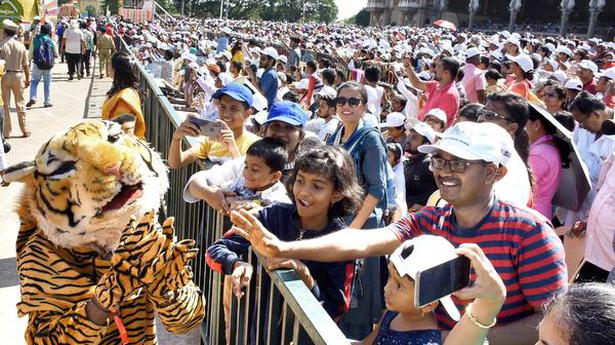 As Dasara celebrations came to a close in Mysuru on Tuesday in all its traditional grandeur, all eyes were on the caparisoned elephants led by Arjuna in the Vijayadashmi procession.

The elephants, many of whom have participated in the festivities more than a dozen times, seemed to anticipate their role and conducted themselves with aplomb and drew the loudest cheer as they set off from the Mysuru palace. Veteran Balarama carried the royal insignia and led the first batch of elephants behind him, each attired in glittering finery and the cultural troupes and tableaux followed them. The single file march of the caparisoned elephants when they emerged out of the Jayarama Gate at Palace North sent the huge crowd waiting at the Town Hall and Chamaraja Circle into raptures and they gave them a standing ovation.

Following Balarama were Abhimanyu, Dhananjaya, Durgaparameshwari, Gopalswamy, Gopi, and Vikrama. Arjuna, who formed the rear of the procession and carried the 750-kg golden ambari or the howdah with the idol of Goddess Chamundeshwari, was flanked by Cauvery and Vijaya. The authorities, however, decided against the participation of Jayaprakash, Eshwara and Lakshmi at the last minute and rested them.

The first batch of elephants led by Balarama covered the 5-km distance in 90 minutes time while Arjuna set out from the palace at 4.15 p.m. and reached Bannimantap grounds at 6.15 p.m.

There are speculations that the ‘Ambari Aane’ Arjuna may have carried the 750-kg golden howdah for the last time when he marched from the palace to Bannimantap on Tuesday.

He will turn 60 in April next year and as per the High Court ruling, elephants above 60 years need not be used for carrying heavy weights or be subjected to gruelling task.

However, veterinarian Nagaraj, who has been tending to the elephants since 20 years, said a decision will be taken by the senior officials sometime next year. He said Arjuna was fit and completed the 5-km march within two hours and showed no signs of fatigue. “Besides, the 750-kg is relatively light weight for an elephant his size and strength, and he is capable of carrying the howdah for another five years. But, the final decision would be taken ahead of Dasara next year,” he added.

The “air strike” carried out by India against Pakistan earlier this year and “Fit India”, a nation-wide movement launched by Prime Minister Narendra Modi recently, were among the central government programmes figuring in the tableaux accompanying the Dasara procession in Mysuru on Tuesday.

Also, the background commentary on the Mysuru palace premises at the time of the procession by BJP leader G. Madhusudhan was replete with praises for Mr. Modi’s achievements and appealled to the gathering to extend support to the B.S. Yediyurappa government.

The occasional use of Hindi by Mr. Madhusudhan also drew flak from Kannada enthusiasts. Pro-Kannada activist Thayoor Vittalmurthy, who was present on the palace premises, expressed his ire over the Hindi commentary and told reporters that he would take up the matter with the authorities.

Veteran journalist Gouri Satya, who is also author of books such as Mysuru memories – The old city of Mysuru, said developmental programmes of the Centre like family planning had been included in the tableaux of Dasara procession earlier. “But, never had they been used for propaganda purposes,” he said. Traditionally, the tableaux highlighted the region’s history, culture, music, folk art, and mythological stories.

Mr. Satya also recalled that the practice of taking out tableaux was introduced only after the State government took over the celebration of Dasara festival.

“During the time of the Maharajas, the Dasara procession did not feature a tableaux. The procession comprised military, horses, camels etc,” added.

The State government has given its administrative sanction for implementing Kudimaramathu scheme in 34 districts at a cost of about ₹499 crore during 2020-21. According to a G.O. issued in this regard, a total of 1,387 works are to be taken up in these districts under this scheme. PWD Secretary K. Manivasan issued a G.O. […]

Lower pendency of cases inspires public faith in the judiciary, and the use of technology, including Artificial Intelligence (AI), in the judicial work can help in speedy justice, but it can never replace human discretion in just decision-making, Chief Justice of India (CJI) S.A. Bobde said on Friday. Speaking at the 79th foundation day of […]

India’s aspiration of becoming a five trillion dollar economy in the near future is not possible without adequate focus on higher education, said C. Raj Kumar, Founding Vice-Chancellor, O.P. Jindal Global University, here on Friday. Quality education Outlining a 10-point programme, which according to him could be adopted by Indian universities to achieve excellence and […]