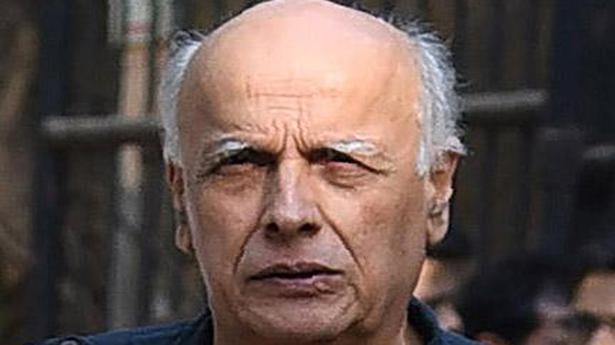 Mahesh Bhatt on Tuesday said that the Indian Constitution may have given people the right to freedom of expression but in the current era, filmmakers and writers are resorting to pre-censorship

Mr. Bhatt, who was attending the trailer launch of No Fathers in Kashmir, which features his wife Soni Razdan, said it saddens him that the film had to face difficultly in getting clearance from the Central Board of Film Certification (CBFC).

“There is a climate of pre-censorship that a filmmaker and writer thinks ten times before he puts pen to paper on what he should be writing, whether the CBFC will allow it to pass or not… This is a country born out of love for free speech and freedom of expression is a constitutional right,” he said. Mr. Bhatt added that he stood by director Ashvin Kumar as he believed in his vision.

Two years after being robbed off the gold by Nozomi Okuhara of Japan in an epic 110-minute final at Glasgow that went down as one of the greatest battles in badminton history, Sindhu finally exorcised the ghost of that heart-wrenching loss with a completely dominating win over the same opponent. Vice-President Venkaiah Naidu, BJP veteran […]

Leader of the Opposition (LoP) in the Rajya Sabha, Ghulam Nabi Azad, was on Monday not allowed to attend a meeting with party workers in Jammu and sent back to Delhi from the Jammu airport for a second time. Congress functionaries said that after Mr. Azad landed at the Jammu airport, police officers told him […]

UN conference on desertification kicks off

The 14th United Nations Conference of Parties (COP) to combat desertification kicked off in New Delhi on Monday with India taking over the presidency of the COP for two years. Prime Minister Narendra Modi is expected to address the convention next Monday, with senior ministers from nearly 70 countries expected to participate at that session. […]