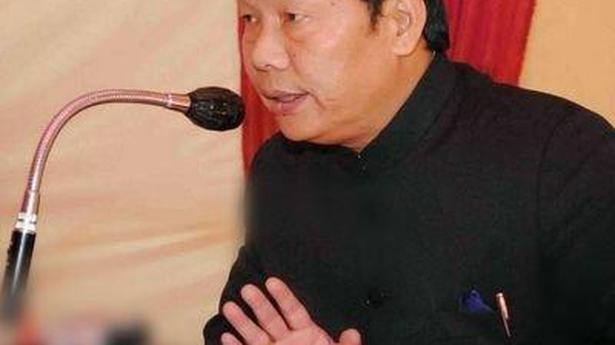 Less than a fortnight after Congress president Rahul Gandhi promised minimum annual income of ₹72,000 for 20% poorest families in India, the party’s Arunachal Pradesh unit has offered ₹5,000 per month for every graduate unemployed youth of the Frontier State.

State Congress president Takam Sanjoy, who is contesting the Lekang Assembly seat, said this would not be all. The party would also provide a one-time grant of up to ₹20 lakh for higher education of deserving students.

“The job market has shrunk under the BJP-led government. We want to provide relief to the educated unemployed youth and earmark ₹60,000 per year for them as sustenance,” Mr Takam said after releasing the Congress manifesto last week along with party leader Padi Richo.

There is no available data on jobless educated youth in Arunachal Pradesh. But a study by the New Delhi-based Rajiv Gandhi Institute for Contemporary Studies said the unemployment rate in the State during 2009-10 fiscal was 49 per 1,000 people.

The BJP’s vision document, on the other hand, has assured bank loans – without any cap – for students pursuing higher education after class 12 from any school from Arunachal Pradesh. No loan request, it promised, would be rejected and repayment will carry a moratorium covering the period needed to pursue a course and a year thereafter to find a job.

For the youth with an entrepreneurial bent of mind, the BJP has assured support of up to ₹25 lakh for innovative start-up idea.

The BJP’s education plan includes converting schools built during “NEFA days” into modern infrastructure and providing free uniform, textbooks, school bags and shoes to students up to Class 12. NEFA means North East Frontier Agency, as Arunachal Pradesh used to be called from 1954 to January 1972 when it became a Union Territory before being made a State in February 1987.

Apart from pledging to revive a Congress-era universal health insurance scheme of up to ₹5 lakh for every citizen and promising free nutritional supplements to BPL families, the Congress has promised a hike in the remuneration for every gaonburah (village headman) and gaonburi (head woman) in the State.

“We intend to double the pay of every head gaonburah from the current ₹2,500 while every gaonburah and gaonburi will get ₹3,000 instead of ₹2,000 now,” Mr Takam said.

The institution of gaonbura, popularly GB, was set up under Assam Frontier (Administration of Justice) Regulation, 1945. The GBs, including their female counterparts and a few head gaonburahs lording over a group of GBs, number more than 3,300 in the State and can influence voters in a village.

In February, Chief Minister Pema Khandu had told the All Arunachal Pradesh Gaonburah Welfare Association that the BJP government has enhanced the montly honorarium of every GB from ₹1,000 to ₹1,500 and of every head GB from ₹1,500 to ₹2,000.

The Election Commission of India (ECI) is set to announce on Sunday the schedule for the high-voltage Lok Sabha elections, which is likely to be spread over seven to eight phases in April-May. The poll panel will be holding a press conference at 5 p.m. at Vigyan Bhavan in New Delhi. The term of the […]

The situation in Kashmir is an internal matter for India and Israel is waiting for a peaceful solution to the current scenario, Ambassador Ron Malka, Israel envoy, said on Friday. Speaking at an interaction with selected members of the media here, he described India as a “precious friend” and said, India-Israel ties have begun to […]

A.K.P.Chinraj, MP, detained and handed over to police four lorries which was allegedly used for illegal sand mining near Paramathi here on Monday. The MP was on his way to Paramathi when he found the lorries being used for sand mining illegally along the River Cauvery. Recently, during the inauguration of Government Law College in […]