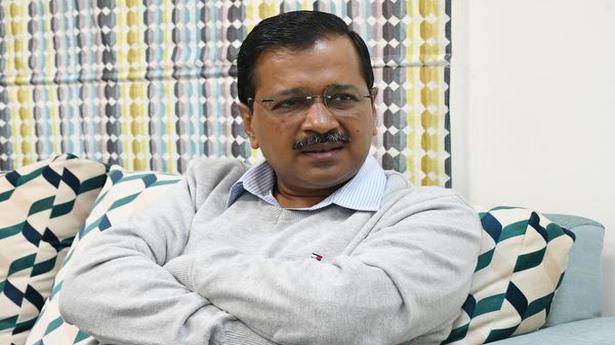 The party said it will march to the Delhi Chief Minister’s residence in Civil Lines and get him out.

The Aam Aadmi Party (AAP) on Tuesday said that the party chief and Delhi Chief Minister Arvind Kejriwal was being kept “almost under house arrest” by the Central government’s Delhi Police. The party said that it would march to the party chief’s residence in Civil Lines and get him out.

The Delhi Police was under the “ambit of the Central government” and not the Delhi government.

“After the Chief Minister met farmers at Singhu border, the Central government’s Delhi Police, on directions of the Ministry of Home Affairs (MHA), has barricaded the house of the Chief Minister of Delhi from four sides and kept him almost under house arrest. No one can meet him and he cannot come out,” AAP chief spokesperson Saurabh Bharadwaj said while addressing a press conference.

He claimed that when party MLAs went to meet the Chief Minister, Delhi Police beat them up and even a maid was not allowed to go to Mr. Kejriwal’s house.

“Officers told us that there has been orders from the MHA to keep the Chief Minister at his house till the farmers’ protest goes on. All our volunteers will go from ITO to Arvind Kejriwal’s house. We will go to his house; we will get him out and we want to see him stand with the farmers’ protest. We request you all to come with us,” Mr. Bharadwaj said.

Assam Sarbananda Sonowal COVID-19 and China’s Wuhan province were just making the global headlines in the beginning of 2020, but Assam chief minister Sarbananda Sonowal was already making contingency plans. In the final week of January, he had an informal conversation with health and finance minister Himanta Biswa Sarma and chief secretary Kumar Sanjay Krishna […]

Three persons, including a B.Tech student died when an autorickshaw in which they were travelling to Hanamkonda from Bavupet was hit by a truck coming in the opposite direction near Hasanparthy Tank on Warangal-Karimnagar Highway on Tuesday. The deceased were identified as Kalkotla Sravani (21), daughter of Yellaiah, of Wardhnnapet, Marri Srikanth (25) of Bavupet […]