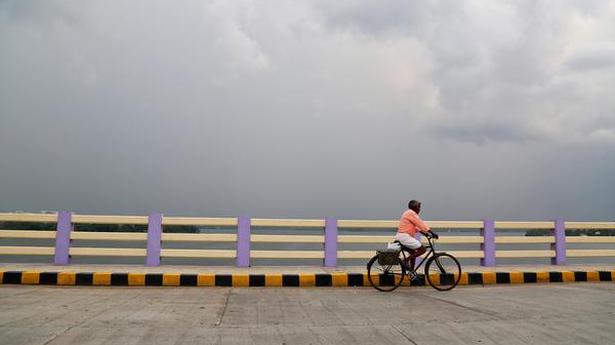 Pre-monsoon rainfall from March to April, a phenomenon critical to agriculture in some parts of the country, has recorded 27% deficiency, according to the India Meteorological Department (IMD).

The IMD recorded 43.3 millimetres of rainfall across the country from March 1 to April 24 as against the normal precipitation of 59.6 millimetres. This was 27% less of the Long Period Average (LPA).

The highest deficiency of 38% was recorded in the northwest India division of the IMD, which comprises States of Uttar Pradesh, Delhi, Punjab, Haryana, Jammu and Kashmir, Uttarakhand, Himachal Pradesh.

This was followed by the Southern peninsula division comprising all five States of the South India and the Union Territory of Puducherry, Goa and coastal Maharashtra, where the deficiency recorded was 31%, the IMD said.

The Central India division is the only one to have recorded more 5% rainfall than the normal.

Pre-monsoon showers, thunderstorms and lightning have killed more than 50 people in Madhya Pradesh, Maharashtra, Gujarat and Rajasthan this month.

Several parts of India receive pre-monsoon rainfall which is critical for those regions. The phenomenon, which is usually from March to May end, is vital as it helps in bringing the temperatures down.

The situation also appears to be grim as large parts of the country have been witnessing heating and there has not been any major relief since April 17, said Mahesh Palawat, vice-president (Meteorology and Climate Change), Skymet.

One of the reasons for a pre-monsoon rainfall is excessive heating from March to June which several parts of the country witness. The moisture from the Arabian Sea and the Bay of Bengal aids in creation of thunderstorms, Mritunjay Mohapatra, Additional Director General of the IMD said.

“Pre-monsoon rainfall is important for horticulture crops in some parts of the country. In States like Odisha, ploughing is done in the pre-monsoon season,” he said.

Laxman Singh Rathore, former Director General of the IMD, said in parts of northeast India and the Western Ghats, pre-monsoon rainfall is critical for plantation of crops.

There will be “moisture stress” in case of a deficit, he said.

“The committee noted with satisfaction that cumulative inflows into the eight designated reservoirs in Karnataka, Tamil Nadu and Kerala and cumulative observed flows at Biligundlu and the seven contact points in Karaikal region were comfortable as of today,” he said. “Overall, the situation in the Cauvery basin was found to be satisfactory,” he added. There […]

A seesaw battle between demand and impact

Nothing draws sharper disapproval these days than granite quarrying. The situation is no different in Kannur which, during the floods last year, witnessed massive landslips, especially at Karikkottakkari and Parakkamala in Ayyankunnu panchayat and Ambayathode at Kottiyur. There were minor landslips in the hill areas in August. According to geologists, the topsoil in the hill […]

Coronavirus | ‘Federalism’ has been forgotten as all power is now concentrated in PMO office, says Sonia Gandhi

The virtual meeting of Opposition leaders comes almost two months after the Centre declared a nation-wide lock down on March 25. Source: thehindu.com Related