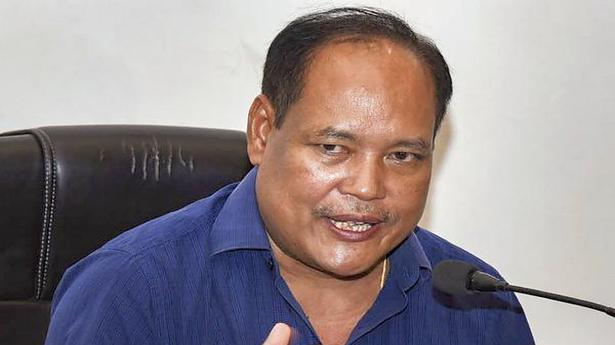 Assam’s Rajya Sabha member Biswajit Daimary on Wednesday resigned from the Bodoland People’s Front (BPF) ahead of the elections to the Bodoland Territorial Council (BTC).

The BPF, which rules Assam as one of two minor regional allies of the BJP, had been ruling the BTC since 2003 until it was dissolved on April 27.

“Having been a member of the BPF from the date of its inception, it is now time for me to move on. I am resigning as the working president of BPF,” Mr. Daimary said in a letter to Hagrama Mohilary, party president and former BTC chief.

“To reflect and realise the aspiration of my people and workers, I believe it is best that I now look ahead at a fresh start,” he said.

According to Assam Finance Minister Himanta Biswa Sarma, Mr. Daimary is expected to join the BJP soon for expanding the footprint of the party in the Bodoland Territorial Region that the Council governs. He also said more senior leaders of the BPF would be joining the BJP.

Mr. Daimary’s exit is likely to affect the BPF as he was believed to have been Mr. Mohilary’s go-to man for resolving critical situations while dealing with the State administration and New Delhi.

Dr. Cyrus Poonawalla, Chairman of the Poonawalla Group on Tuesday said that the Serum Institute of India was committed to manufacture at least one billion doses of the University of Oxford’s COVID-19 vaccine after getting required approvals. Source: thehindu.com Related

Assam Accord committee’s report under consideration of State govt: MHA to Rajya Sabha

The committee with more than a dozen members was set up as per the Clause 6 of the 1985 Assam Accord. Source: thehindu.com Related