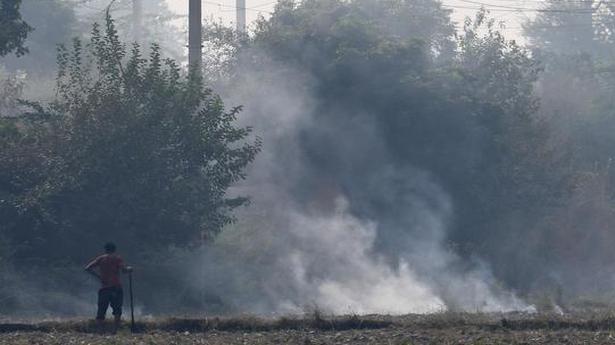 The share of stubble burning in Delhi’s pollution has risen to 35%, the season’s highest, and the hazardous haze shrouding the city on Wednesday can be “purely” attributed to it, said the Ministry of Earth Sciences’ air quality monitor SAFAR.

Northwesterly winds, which are favourable for plume transport, will continue to blow in the region for another two days, it predicted.

“After recovering from firecracker smoke, Delhi’s overall air quality has again plunged into ‘severe’ category. It can be purely attributed to stubble fire, the share of which increased to 35% today,” SAFAR said in a report.

However, Haryana and Punjab have recorded around 1,500 fewer farm fires in the last 24 hours, it said.

A marginal improvement in the air quality is predicted on Thursday due to an expected increase in wind speed which will help disperse pollutants faster.

On Thursday, the share of stubble burning in Delhi’s pollution is predicted to be 27%.

Delhi continued to wilt under a smoky haze for the second day on Wednesday with its air quality remaining in the severe category.

The city’s overall air quality first dropped to “severe” levels on Monday night, primarily due to the impact of firecracker emissions, stubble burning and unfavourable weather.

Pollution levels remained “severe” for most part of the day on Tuesday as a thick smog shrouded the city and the satellite towns of Gurugram, Ghaziabad, Greater Noida and Noida.

Bus services hit in Karnataka after protests over Shivakumar arrest

Violent protests after the arrest of Congress leader D.K. Shivakumar have forced the Karnataka State Road Transport Corporation (KSRTC) to cancel bus services in Ramanagar district. On Wednesday morning, the KSRTC also suspended a majority of services between Bengaluru and Mysuru. An official of the KSRTC said that Bengaluru – Mysuru bus services were stopped […]

Facing lockdown and no work, major cities of Gujarat, including Surat, Ahmedabad and Vadodara, are witnessing an exodus of migrant workers leaving in the thousands, either walking or on motorbikes, with a complete shutdown of transportation services. Local officials said over 5,000 motorcycles have left Surat. “Migrant workers from diamond and other sectors are leaving […]