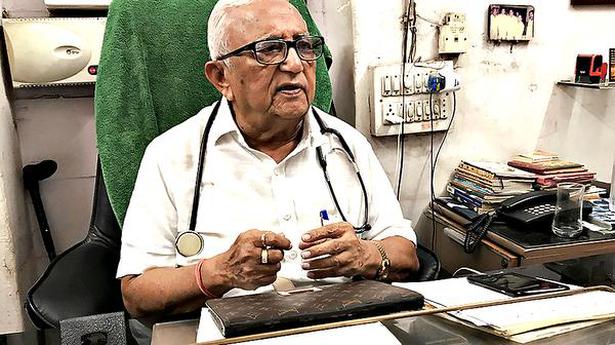 Over half a century ago, a 25-year-old youth armed with a Diploma in Medical Practice and a dream in his eyes came to Adilabad town from Patan Bori, 25 kms from the neighbouring Yavatmal district of Maharashtra. He was determined to earn enough money through practice to be able to pursue MBBS studies.

Despite his determination, the dream remained unfulfilled. But what Jaynarayan Jayswal has achieved at the age of 80 somehow compensates for it.

He has now earned a post graduate diploma in oncology care from the National Cancer Institute, Nagpur, which is affiliated to the Tata Cancer Hospital, Mumbai, and he is readying himself to offer services to locals with regard to pre and post operative cancer care.

Dr. Jayswal, as he is famously known in this part of the world, continues to run his clinic at the busy Gandhi Chowk, treating patients, both the elite as well as the hoi polloi.

When he started his practice in this town in 1964, he used to charge ₹3 as fee from patients. For children, it was 50 paise less. “I used to watch the handsome, impeccably dressed Dr. Nooruddin Shaikh whenever he came to Patan Bori on visits,” recalls the octogenarian about his role model, revealing that he has excellent memory despite his age.

“I wanted to become a doctor like him. But I had no money. Fate, advice and help of elders and well-wishers led me to pursue the three-and-a-half-year course of Diploma in Medical Practice (Maharashtra offered such a course back then). I thought I would join MBBS course after completing the diploma but my economic condition had not improved to ensure that,” he says.

After initial practice at Patan Bori, Dr. Jayswal set up his dispensary in Adilabad and also established the first X-ray centre and pathological lab. “I got too busy with my practice to take time off to study degree in medicine after that,” he says with a tinge of regret in his voice.

“TB and asthma were rampant in those days and drugs used in treatment of many diseases were different. We used to administer adrenalin for many diseases,” the doctor, who still works with ‘seva bhav’ or motto of service, recollects.

The zealous doctor will receive the diploma certificate at the institute in Nagpur on August 17 as part of its convocation. “I will try and be of help to people in identifying various types of cancers and the treatment required, and, of course, for post treatment care,” he asserts.

Will give a date for Rafale review, says CJI Ranjan Gogoi

Chief Justice of India Ranjan Gogoi on Monday remarked that he will soon be setting a date for hearing the Rafale review petitions. “I have said that a date will be given for the Rafale case. I will give a date,” the Chief Justice said. There are hardly 14 working days left before the court […]

Hundreds of people in Guntur and Krishna districts hit the roads in protest on Friday demanding that Amaravati be retained as the sole capital of Andhra Pradesh. The protesters, fearing that the Andhra Pradesh Cabinet in its Friday meeting will endorse the G.N. Rao Committee report recommending the establishment of three capital cities in the […]

Ahmedabad Municipal Corporation (AMC) has undertaken intensive surveillance and aggressive testing to detect as many COVID-19 cases as possible and isolate them to curtail the spread of the pandemic. So far, 133 cases have been reported from Ahmedabad with 50 new ones on Thursday morning alone. So far, six persons have succumbed to their infection […]