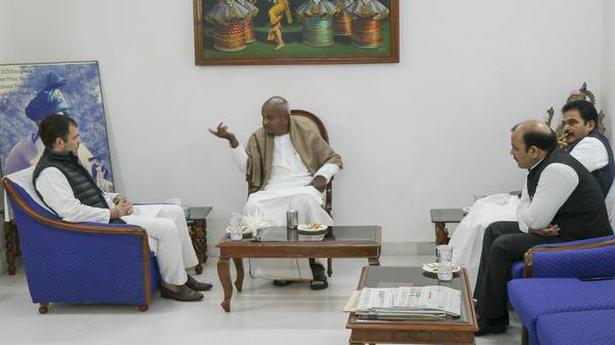 JDS chief H.D. Deve Gowda on Wednesday demanded that Congress President Rahul Gandhi give his party at least 10 seats to contest in the upcoming Lok Sabha polls in Karnataka.

“Gandhi discussed about seat sharing in Karnataka. This is the first such discussion between the two parties. There are 28 Lok Sabha seats in the State. Earlier, I had asked for 12. At the meeting, I requested Rahulji to give at least 10 seats to the JDS,” Mr. Gowda told reporters.

Mr. Gandhi will take the final decision after taking inputs from Mr. Ali and Mr. Venugopal, he said.

Mr. Ali said the seat-sharing arrangement will be announced by March 10.

“At the meeting, the two leaders discussed the prevailing political situation in the country, Opposition unity and pre-poll alliance in Karnataka. The Congress would contest two-thirds of the seats and the rest are for the JDS. Seat wise, we have to discuss and finalise. We are going to reach a decision shortly and will announce it by March 10,” he said.

Petrol price hiked by 40 paise per litre, diesel by 45 paise

This is the fourth daily increase in rates in a row since oil companies on Sunday restarted revising prices in line with costs, after ending an 82-day hiatus. Source: thehindu.com Related

India on Wednesday received the first tranche of 4,475 oxygen concentrators from the Temasek Foundation, Singapore. The Foundation has offered to donate 20,000 concentrators to India. Source: thehindu.com Related

The Chennai Photo Biennale Foundation and Confederation of Indian Industry have extended the deadline for submissions as a part of the #My2020Hero initiative. As part of #My2020Hero, people are encouraged to share a photo and story about a real-life hero who has helped them this year. Entries can now be submitted till December 20. Entry […]