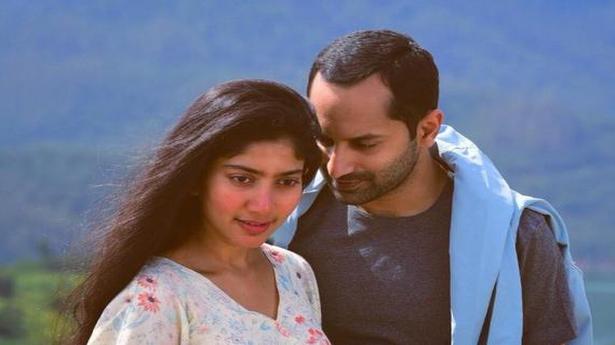 For a movie set almost entirely inside a mental asylum, it is the incongruity of the location that catches our attention right from the beginning in ‘Athiran’. It is a sprawling British-era mansion located in a secluded spot deep inside the forests, reminiscent of the famed ‘Overlook Hotel’ in Stanley Kubrick’s ‘The Shining’. More than a location which serves the purpose of a mental asylum, it seems to be one tailor-made to lay out the horror elements which are packed into a movie, which does not belong to the horror genre.

M.K. Nair (Fahadh Faasil), a psychiatrist, arrives at the remote mental asylum on a mission from the Government to check on certain complaints regarding its running. Benjamin (Atul Kulkarni), who runs the asylum, is said to be using unconventional methods, including incarceration and ‘memory erasure’ techniques. Nithya (Sai Pallavi), a patient who is not listed on the rolls but lodged in solitary confinement, evokes Nair’s curiosity, much to the annoyance of Benjamin.

Director Vivek draws inspiration from a host of movies from ‘Shutter island’ to ‘Stonehearst Asylum’ in crafting his debut venture. Maintaining an element of mystery about most of the characters, he does manage to throw in a surprise or two at the audience, so much so that one is confused at some points as to who the real patients are.

But, this mystery wears thin quite quickly, as the past of one of the key characters is revealed. It is then a long wait for it all to pan out on screen, topped by that inevitable ‘twist’ in the tale at the end. Those who have not watched the movies from which it is inspired would possibly fall for the way the writer misleads almost till the end, since it is executed reasonably well. Some of the sequences are genuinely creepy, yet most of it is marred by the over-the-top background score. A song sequence, where there was no scope for one, becomes a further drag on the narrative.

With the screenplay being handled by P.F. Mathews, there was some hope of a deeply-affecting, taut narrative, but his contribution seems to be limited, as the story is written by the director himself. ‘Athiran’ entices the audience with a few surprises, but in the end falls short of expectations.

A Delhi court on Friday granted bail to businessman Ratul Puri, nephew of Madhya Pradesh Chief Minister Kamal Nath, in a money-laundering case related to a bank loan fraud. Special Judge Arvind Kumar granted the relief to Mr. Puri saying no purpose will be served by keeping him in further custody. The Enforcement Directorate had […]

Chennanna Walikar (77), who passed away late on Sunday, was a prominent voice of the Bandaya (rebel) literary movement in Kalyana Karnataka region. Known for his deep sympathies for the deprived communities, Mr. Walikar was associated with various socio-cultural actions directed against caste and class exploitation. Though he had multiple identities as teacher, scholar, writer […]

Indecision over part of Anjanagiri reservoir bund delays its completion

Indecision over the type of structure or bund to plug the gap between two hillocks as part of the construction of Anjanagiri reservoir, a key component of Palamuru-Rangareddy Lift Irrigation Scheme, is likely to delay the completion of the first storage point of the project. Of the three reaches of bund construction to form the […]