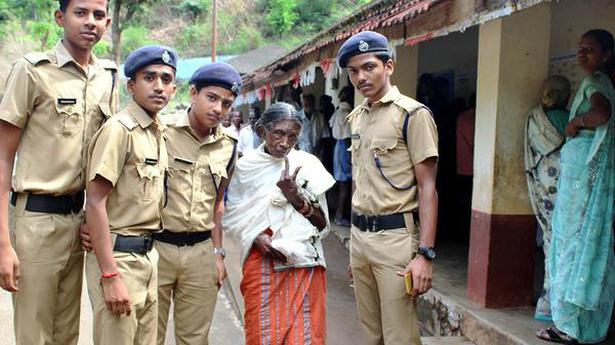 Electoral Literacy Club members and Student Police Cadets of Government Higher Secondary School at Agali, Attappady, were on cloud nine on Wednesday. Their efforts in creating voting awareness in remote Adivasi colonies of Attappady paid dividends when most tribal voters exercised their rights in the Lok Sabha elections held on Tuesday.

The students goaded the Adivasis from different colonies to come and vote at their designated polling stations.

The polling booth at Chindakki witnessed a record turnout when it registered 73.08% polling. “Never before did this booth register more than 60% polling in a Parliament election. This is a record of sorts, and a major achievement by the students as well,” said Electoral Literacy Club master trainer T. Satyan.

As many as 10 colonies were under the Chindakki polling station. Adivasis from remote colonies such as Aanavai came out of the forest to vote in good number. They reiterated their demand for a polling booth at Aanavai.

Tribal people from the Aanavai colony had been largely averse to voting because of the risk involved in the journey and back. As the route to Aanavai is known for elephant infestation, Adivasis usually stay away from voting.

“This time the students got many of them to vote by constantly persuading them and convincing them of the importance of exercising their right,” said Mr. Satyan.

The students had conducted special voter education programmes at the isolated Murugala colony. Out of the 20 voters there, 18 polled their votes. The remaining two were in hospital.

From the Thadikkundoor and Chundukulam colonies too there was excellent response to voting.

The eldest member of the colony, 104-year-old Nanji, had been waiting for the students when they reached Chundukulam to take her to the polling booth. Ms. Nanji had promised the students that she would vote this time. She kept her word, and so did the students by dropping her back home after her voting.

The students had introducd voting machines and VVPAT machines to the tribes using their community language. The tribes of Irula, Kurumba and Muthuka in Attappady speak their own dialects. As the students were from those communities.

Morning digest: 70 dead as many States reel under monsoon fury, Congress to take up leadership issue today, and more

The depression that has caused torrential rainfall mainly in Kerala, Karnataka, Maharashtra and Tamil Nadu, claiming at least 70 lives and forcing the evacuation of tens of thousands of people, is expected to abate from Saturday, the chief of the India Meteorological Department (IMD) said on Friday. The Congress Working Committee (CWC), the party’s highest executive body, […]

The Department of Health and Family Welfare will launch a campaign for vaccination for the Kyasanur Forest Disease (KFD) for the people in rural and forest areas of Udupi district by November. Prashanth Bhat, District Nodal Officer, KDF, told The Hindu that the department had placed an indent for 1.25 lakh doses of the vaccine […]