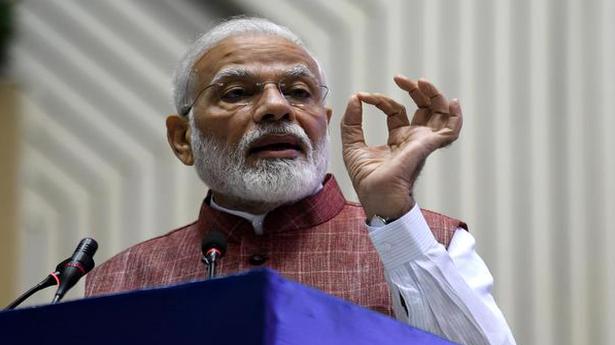 Prime Minister Narendra Modi is addressing the nation after the historic verdict of the Supreme Court on the Ayodhya title case.

A Constitution Bench of the Supreme Court on Saturday laid the foundation for the construction of a temple on the disputed Ramjanmabhoomi-Bari Masjid site.

Here are the updates from the PM’s speech:

Addressing the nation, Prime Minister Narendra Modi says “My dear countrymen, today the SC has pronounced judgement on such a matter which has a historic background of several decades”.

Mr. Modi says ‘The entire country felt that the case should be heard everyday, and it was. That entire process is now at an end.”

“The whole world already knew that India is the largest democracy but today it has been proven that it is also vibrant and strong,” Mr. Modi says.

The Prime Minister says “The way all categories of people have accepted the verdict with open hearts, it shows the strength of our unity and national character”.

He says “After so many thousands of years, unity in diversity is very much in evidence. Today’s event and the way it has been played out will be a reference point.”

“Golden chapter not just with respect to our unity but also our jurisprudence. SC heard everyone, with great patience, and to everyone’s satisfaction the verdict was unanimous,” says Mr. Modi.

“For this the judges, courts and judicial system are to be commended.”

Mr. Modi says “November 9th was the day the Berlin Wall fell and two rival ideologies had united. Today, we saw the opening of the Kartarpur Sahib corridor.”

He says “Ayodhya verdict on this day, therefore, is telling us that the message from the date is to be united in harmony and amity. Anyone holding onto any bitterness, I request that they too give it up.”

The Prime Minister says “SC has also given the message that the solution to the most difficult of issues lies in the Constitution and the ambit of law, even if it takes time.”

Mr. Modi says “The SC verdict has brought a new dawn for us. Many generations may have been affected by the dispute but we must resolve that we make a new start for a New India.”

He adds “To move forward with the confidence that we don’t leave anyone behind.”

Mr. Modi says “Now as a society, every Indian has to work by giving priority to his duty, his duty.
The harmony between us,
Our unity,
Our peace,
Very important for the development of the country.”

The Prime Minister says “Today, with the decision on Ayodhya, this date of November 9 has also given us a lesson to move forward together.
Today’s message is to add – to join and to live together.”

A Constitution Bench of the Supreme Court on Saturday laid the foundation for the construction of a temple on the Ramjanmabhoomi site where the 16th-century Babri Masjid complex once stood before it was demolished by kar sevaks on December 6, 1992.

On the Babri mosque demolition, the judges declared in one voice that it was “a calculated act of destroying a place of public worship”. The Muslims have been wrongly deprived of a mosque that had been constructed well over 450 years ago, the Bench said.

The Supreme Court on Saturday cleared the way for the construction of a Ram Temple at the disputed site at Ayodhya, and directed the Centre to allot a 5-acre plot to the Sunni Waqf Board for building a mosque.

In one of the most important and most anticipated judgments in India’s history, the Constitution Bench headed by Chief Justice Ranjan Gogoi put an end to the more than a century old dispute that has torn the social fabric of the nation.

The apex court said the mosque should be constructed at a “prominent site” and a trust should be formed within three months for the construction of the temple at the site many Hindus believe Lord Ram was born.

Political parties in Tamil Nadu expressed contrasting views on the Election Commission’s decision to conduct the Lok Sabha polls in Tamil Nadu in a single phase. “It is a good decision. As far as Tamil Nadu is concerned, the AIADMK led alliance will win all 39 seats in Tamil Nadu and 1 seat in Puducherry,” […]