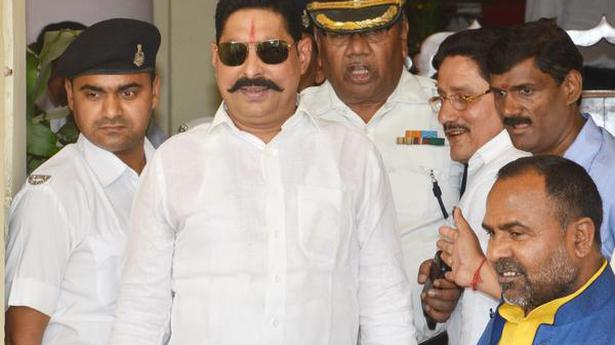 Bihar is known for its “bahubali (strongmen)-turned-politicians” calling the shots during polls. The 2019 Lok Sabha election seems no different.

Even though some of the Bahubalis are in jail, and those outside are facing several criminals charges, they are still active in the poll battle through their wives and close relatives who have been fielded by all most all major parties in the State.

Topping the list is the Congress which has fielded Neelam Devi, wife of dreaded don-turned-politician Anant Singh, from Munger Lok Sabha constituency. Ms. Devi is pitted against NDA candidate Rajiv Ranjan Singh alias Lalan Singh (JD-U). Mr. Anant Singh, former JD(U) MLA from Mokama, has 16 criminal cases pending against him. He wanted to contest the poll himself, but the Congress decided to field his wife as there was no case against her. Mr. Anant Singh is also known as Chhote Sarkar in his areas of suzerainty —Barh, Mokama, Lakhisarai and Munger. “My wife [Neelam Devi] will win the election come what may. The people of Munger have so much love and respect for me,” Mr. Anant Singh recently said.

Ranjeet Ranjan, wife of another don-turned-politician Rajesh Ranjan alias Pappu Yadav, is the Congress candidate from Supaul seat. Ms. Ranjan had won the 2014 Lok Sabha polls from the same constituency. In the 1990s, Pappu Yadav was a terror in Kosi areas of north-east Bihar and had served jail for several years in connection with the murder case of CPI(M) leader Ajit Sarkar of Purnea district.

Third on the list is Heena Sahab, wife of former Siwan MP Mohd. Shahabuddin, who has been fielded by the Rashtriya Janata Dal. Mr. Shahabuddin is currently lodged in Tihar jail in Delhi in connection with a double murder case. Known as the “Sultan of Siwan”, Mr. Shahabuddin has been a four-time RJD MP from Siwan and his name still spells terror among the residents of the district. Ms. Sahab had been defeated in the 2014 Lok Sabha polls by BJP candidate Om Prakash Yadav. This time, the NDA has given the Siwan ticket to Kavita Singh (JD-U), wife of another strongman-turned-politician Ajay Singh, whose rivalry with Mr. Shahabuddin is a long-drawn-out story.

The RJD has also given ticket to Veebha Devi, wife of suspended party MLA Raj Ballabh Yadav, from Nawada. Mr. Yadav, a criminal-turned-politician, is currently lodged in Nawada jail in connection with an alleged rape case. He is also accused of illegal sand and stone mining in the area. Recently, Rabri Devi, RJD leader and wife of party chief Lalu Prasad, had campaigned for Ms. Veebha Devi in Nawada.

Lovely Anand, wife of another don-turned-politician Anand Mohan Singh, too, has decided to contest the election from Sheohar as an Independent candidate. Mr. Anand Mohan is lodged in Saharsa jail in connection with the murder of a district magistrate. Ms. Anand had recently joined the Congress hoping to get a ticket from the constituency but under the mahagathbandhan seat-sharing pact, Sheohar went into the RJD kitty.

Some of the bahubali-turned-politicians have also fielded their brothers and sons in the poll ring. The RJD has given ticket to Randhir Singh, son of former MP Prabhunath Singh, from Maharajganj. Mr. Prabhunath Singh was convicted in 2017 in a 22-year-old murder case and is currently lodged in Hazaribagh jail in Jharkhand. He was a terror in the areas of Maharajganj, Saran and Siwan. Similarly, the Lok Janshakti Party has fielded Chandan Kumar Singh, brother of criminal-turned-politician Surajbhan Singh, from Nawada seat. Mr. Surajbhan’s wife Veena Devi had won the 2014 Lok Sabha polls from Munger.

“Bahubalis have been synonymous with Bihar politics. When they get convicted, they field their wives or other family members to win the poll by proxy and enjoy the privileges of an MP. Sadly, no mainstream parties are averse to giving them tickets during polls,” said political analyst Ajay Kumar.

Rise in prices of essential commodities hits people in Manipur

No action has been taken against any trader or grocery shop owner Source: thehindu.com Related

The Chavyur police on Sunday booked Indian Union Muslim League (IUML) leader Noorbina Rasheed and her son Subin Rasheed on the charges of violating home quarantine rules and hosting a wedding event in the family without sticking to the safety guidelines issued by the Union and State governments in view of the COVID-19 scare. Both […]