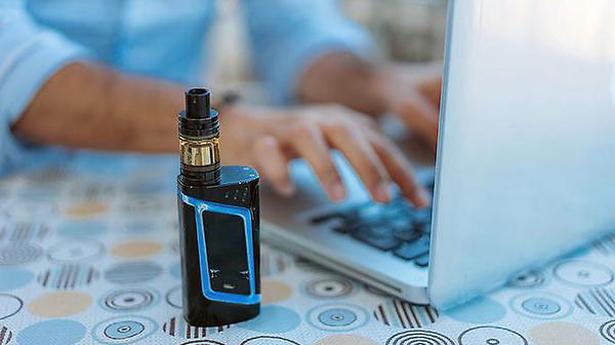 The ban on e-cigarettes has triggered demand for the product. However, owners of stores where the products were sold said that they took e-cigarettes off the shelves and stopped selling them after the Union Cabinet decided to ban e-cigarettes in India.

Union Finance Minister Nirmala Sitharaman, who on Wednesday announced the ban, said that the decision was taken keeping in mind the impact of e-cigarettes on youth.

The e-cigarettes are sold for anywhere between ₹ 550 and ₹ 14,000.The product is adopted by many people in Hyderabad and is sold in a few upscale pan shops and electronic stores across the city.

“After the decision was announced, customers wanted to stock the product. When we shut down our store, thousands of people called asking for e-cigarettes or liquid cartridges. Some customers said they might go back to cigarettes if they do not get e-cigarettes. We stopped selling the product,” said a store owner, who chose anonymity.

Another store owner said the government should allow them to recover the money invested in the products either by selling them or sending the stocks back to the company they bought from.

The decision to ban e cigarettes was received with criticism by Association of Vapers India.

They said legal options would be explored to contest the decision. However, doctors said that cigarettes or e-cigarettes, nicotine in the products poses harm to the health of people.

Representatives of AVI said that the haste shown by the government in enacting the ban indicates it is more concerned about protecting the cigarette industry than improving public.

Director of AVI, Samrat Chowdhary, said that they will continue to fight for the rights of e-cigarette users and smokers looking to quit or reduce harm to themselves. “Apart from exploring legal options, we will also raise the issue at national and international forums. The government has snatched the right of India’s 11 crore people to reduction of harm. This cannot be allowed to happen,” Mr Samrat said.

Vinod G Sathwani from Hyderabad, who was a heavy cigarette smoker and shifted to e-cigarettes said that the government is taking away a better option he has. He said that all the products that were banned were available underground.

Secretary of Indian Dental Association – Deccan branch A. Srikanth said that continuous inhalation and exhalation of nicotine in vapour form leads to dryness of mouth.

“When saliva gets dried, the washing effect on tongue and teeth comes down. In these situations, germs in mouth will have more effect, activity of caries (decay of teeth) become faster. Long term usage of nicotine alters sensation of taste buds,” said Dr Srikanth.

Superintendent of Government General and Chest Hospital, Dr Mahaboob Khan said that the main hazardous products in cigarettes or e-cigarettes is nicotine which poses risk to lungs, stomach, eyes, and other parts.

The operation was conducted in coordination with the Indian Coast Guard, and all 12 fisherman were brought safely back to shore, officials said Source: thehindu.com Related

In another incident a woman was attacked by a herd of jumbos in an agricultural field Source: thehindu.com Related

After over two decades of service, he was declared deserter without post-retirement benefits A sepoy, who had served more than two decades with the Indian Army and missed the deadline of re-joining duty reportedly on account of his wife’s illness, is forced to work as a daily-wager without post-retirement benefits in Odisha. Chanduram Majhi (51), […]