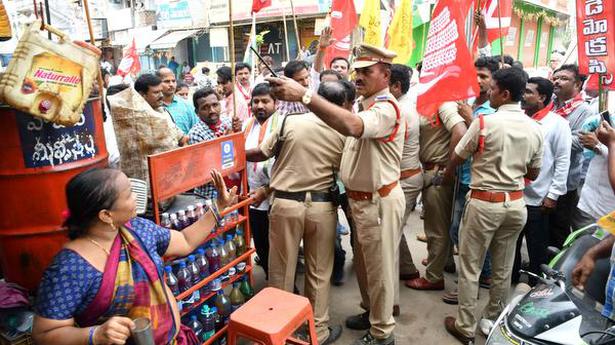 The State-wide bandh called by the TSRTC-JAC on the 15th day of the indefinite strike by the RTC employees to press for merger of the public transport entity with the State government among other demands, threw normal life out of gear across the erstwhile composite Khammam district on Saturday.

Described as a resounding success by the RTC-JAC, the bandh saw almost all the Corporation buses as well as hired buses staying off the roads, shops downing their shutters and Opposition parties holding joint protests expressing solidarity with the RTC employees’ strike.

Rallies, road rokos, demonstrations by the activists of the Opposition parties including the Congress, the CPI (M), the CPI (ML-ND) and the CPI, members of different mass organisations in support of the ongoing strike by the RTC staff marked the bandh.

Reminiscing the days of the “Sakala Janula Samme” during the peak of statehood movement in 2011, the aggrieved striking employees poured out their woes by singing songs at the bus stations in Khammam and elsewhere in the district.

Articulating their demands assertively, the striking employees of the Corporation gave vent to their travails resenting the government’s alleged “apathetic attitude” towards their 15-day old strike, through songs during a demonstration held in front of the bus station in Khammam.

Similar demonstrations were held in front of the virtually deserted bus stations in Kothagudem and Bhadrachalam towns.

Several demonstrators were detained by the police in various parts of the district during the protests. However, all of them were let off some time later.

Police remained vigilant and made elaborate security arrangements in and around the bus stations and depots all over the district to prevent untoward incidents.

Cadres of the Left parties played kabaddi in front of the bus stand in Khammam in an effort to show their solidarity with the agitating RTC employees and provide an impetus to their fortnight-long indefinite strike.

Members of various teachers’ and other employees’ associations also pledged their support to the strike by sporting black badges in Madhira, Penuballi and various other mandals of the district.

The Tadepalli police on November 4 seized about ten tonnes of suspected beef being smuggled in a container van from Odisha to Chennai. The vehicle’s driver and cleaner were taken into custody. Police alerted veterinary department officials to ascertain whether the seized meat was beef or of any wild animal. Samples have been sent to […]

Nipah case: 7 in isolation and 314 quarantined in Kerala

A total of 314 people have been quarantined and placed under observation for having been in immediate contact with the 23-year-old youth from Vadakkekara in Paravur in northern Ernakulam, who has been diagnosed as having contracted the Nipah virus. Authorities at a private hospital in Kochi where he is under treatment said he was stable […]

Malegaon case: Pragya appears before a special court in Mumbai

Mumbai BJP MP Pragya Singh Thakur on Thursday appeared before a special NIA court here in connection with the 2008 Malegaon blast case, in which she is one of the prime accused. Also read | Court levies ₹10,000 fine on Malegaon blast accused Her appearance came a day after special court judge V.S. Padalkar asked […]