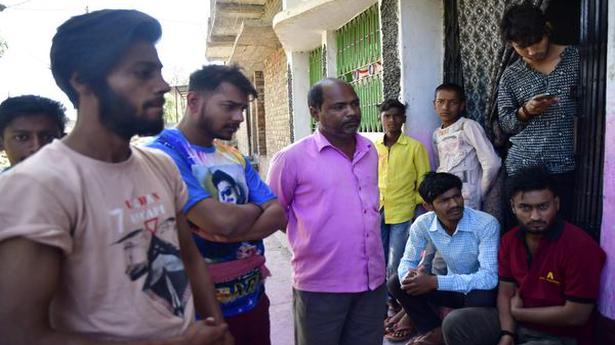 An animated political discussion is under way among a group of young men in Kharidi Bigha village in Nawada parliamentary constituency. Firebrand Bharatiya Janata Party leader and sitting MP Giriraj Singh has been asked to contest from the Begusarai seat. Alliance partner Lok Janshakti Party has announced the name of Chandan Kumar Singh, brother of don-turned-politician Suraj Bhan Singh, as the National Democratic Alliance’s candidate from the constituency.

One of the young men says, “The BJP has committed a major mistake by shifting Giriraj Singh from here. He could have easily retained the Nawada seat.” “Nawada has come alive ever since Giriraj Singh came here. Instead of crime, politics in Nawada [has] revolved around Hindu pride [since then],” Manish Kumar (25) tells The Hindu.

What’s wanted most, though, is employment. Did Mr. Singh bring any factory or developmental project to Nawada? “No, not really, but at least he was socially connected and available to us,” Raju Kumar (24) and Shib Kumar (26) respond immediately.

Some of Kharidi Bigha’s men work as waiters in Kerala, some have migrated to find employment in the unorganised sectors of Delhi and Jammu. For them, Mr. Singh is a political reflection of Prime Minister Narendra Modi. How? “He, too, talks about the pride of country and of Hindutva. Earlier, no politician had raised such issues, which are essentials of life,” they say.

The group swells to a dozen and a mention of the Balakot air strike leads to animated responses, some in unison. Comments include: “Only a Prime Minister like Narendra Modi could have done this. Country should come first for every Indian, before any other issue.” But will they vote for the BJP because of the air strike? “Yes, yes, yes…has it [the air strike] been done before?” they ask in one voice.

What about the BJP’s alliance partner in Bihar, Chief Minister Nitish Kumar? “ He has lost all his political credibility. One doesn’t know [to] which side he will make his next move. He is a paltimar mukhyamantri (turncoat Chief Minister),” says Neeraj Kumar (22). He is a Kurmi, the same Other Backward Class (OBC) to which Mr. Kumar belongs.

But Mohammad Shagir Alam, a motorcyle mechanic from Ansar Nagar, a village under the Bundelkhand police station, says, “Ever since Giriraj Singh came to Nawada, this district has been completely polarised between Hindus and Muslims. We don’t feel safe now, we don’t venture out late in the evening, nobody knows what will happen. The situation was not like this before.”

Last year during Ram Navami festival, there was a riot-like situation at the town’s Sadhbavna Chowk and curfew was imposed for some hours. It was alleged that Mr. Singh visited those arrested in the case in jail. “It’s frightening for people like us, who eke out their livelihood on a daily basis,” adds Mr. Alam.

Nawada has 9.27% Muslim voters, while upper caste Bhumihars (the community to which Mr. Singh belongs) and Yadavs make up 12.06% and 16.69% respectively.

Elderly voters in Madho Bigha, Bhadauni and Akbarpur feel neither Mr. Kumar’s government nor Mr. Singh have done anything for them.

“We are farmers. Will we eat national pride in the name of Hindutva? Social cohesion is more important than all these animosities prevailing between two communities in Nawada today,” they tell The Hindu.

“Nothing has been done for farmers’ welfare,” says Ram Briksha Singh, a Bhumihar farmer.

A group of farmers are seen reading a Hindi newspaper in the afternoon sun by the roadside at Ganjas village in the neighbouring constituency of Gaya. When asked about the welfare schemes launched by the NDA government for the farmers, Surendra Yadav, Rajendra Chaudhury, Ram Vilas Singh, Subodh Rajak and Durga Paswan laugh out aloud and say, “We are yet to get the ₹6,000 that the Modi government has announced. Officials at the local block office need a lot of papers and when we go with the papers, the Internet connection fails, only to be restored past midnight.”

They also rue that the government is taking away their agricultural land “forcibly” for the construction of a railway yard at nearby Bandhua.

Dharmendra Kumar, Sudhir Kumar, Vikas Kumar and their friends, students of Gaya College, are rooting for Mr. Modi. “We will vote for PM Modi, not for any local candidate. Modi must be given a second chance,” says Dharmendar Kumar. To the question whether that would help them secure employment, Vikas Kumar says, “Gulami se acchha berojgari hai (it is better to be unemployed than to be a slave).”

“Every day Pakistan sends terrorists to our country. They kill our soldiers and innocent men. For how long will we tolerate this? Only a PM like Modi can give them a fitting reply,” they say in unison.

Under the alliance’s seat adjustment, Gaya has gone to the Janata Dal-United kitty this time, with sitting BJP MP Hari Manjhi replaced by JD(U)’s Vijay Manjhi. The Gaya constituency has 20.24% Yadav, 14.02% Musahar (Dalit) and 13.6% Muslim voters. Both Nawada and Gaya go to the polls on April 11.

The Arunachal Pradesh government has given ‘compulsory retirement’ to a senior civil servant as punishment for sexual assault on an 11-year-old girl. The State’s Tax and Excise Joint Commissioner Tani Jongkey was served the retirement order on August 12 with immediate effect under the Central Civil Services (Classification, Control and Appeal) Rules, 1965. The order […]

Ahead of the second phase of voting on Thursday, Congress president Rahul Gandhi said Prime Minister Narendra Modi now only talks about “national security” because he “stands exposed as a politician full of lies and false promises”. He emphasised that “the real and biggest national security issue is unemployment”. In a wide-ranging interview with The […]

Lieutenant Governor Kiran Bedi has once again come out in fulsome praise of Prime Minister NarendraModi and policies of his government.Minutes after M Source: thehindu.com Related