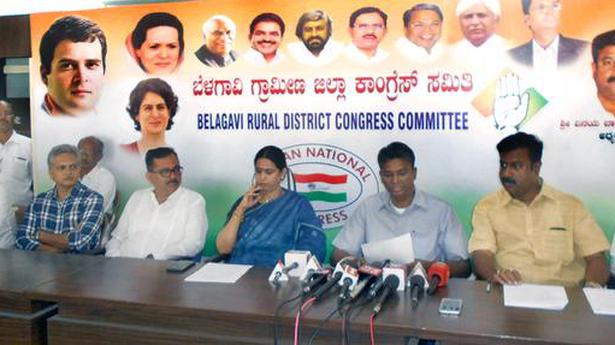 At a Congress workers meeting in Belagavi on Wednesday, it seemed that the senior leaders had buried their hatchet and come together to work for the Lok Sabha polls. Minister Satish Jarkiholi and MLA Lakshmi Hebbalkar, who have had differences in the past, sat alongside and discussed poll strategies. Mr. Jarkiholi told workers that Suresh Angadi of the BJP had been winning due to different political waves and not because of his individual leadership. However, this time, no wave will save him. He is bound to lose, Mr. Jarkiholi said.

He later told media persons that the District Congress Committee had sent two names for Belagavi Lok Sabha seat and the party high command had picked one of them. “We recommended V.S. Sadhunavar and Shivakant Sidnal. Of them, the party leaders have chosen Mr. Sadhunavar,” Mr. Jarkiholi said.

He clarified that Mr. Sadhunavar’s rebellion in the last Legislative Council polls was forgiven and he was accepted into the party field long ago. Mr. Sidnal, who was present in the meeting, said that he was not upset. He would work for the party, he said.

The police have sounded high alert in the erstwhile naxalite stronghold of Manthani and Peddapalli Assembly segments for the elections to Peddapalli parliamentary constituency after the Maoists killed a BJP legislator and four security personnel by triggering a landmine in Dantewada region of neighbouring Chhattisgarh on Tuesday. Incidentally, there was no naxalite movement in the […]

A group of over 200 journalists has condemned the FIR filed against founding editor of news portal The Wire Siddharth Varadarajan by the Uttar Pradesh police. The group consisting of journalists from both print and electronic media termed it a brazen attempt to muzzle the media. Also read: Editors Guild criticises U.P. govt. The police […]

Former Chief Minister and Congress Legislature Party leader Okram Ibobi on Sunday slammed the BJP-led coalition government for relaxing the indefinite curfew and lockdown on Saturday, which led to thousands of people binge-shopping while throwing safety and social distancing norms to the wind. Talking to reporters in Imphal on Sunday, Mr. Ibobi wanted to know […]