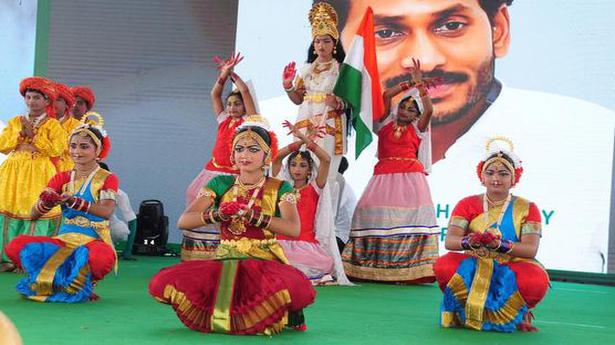 The Belum Caves festival concluded on a grand note on Sunday at Kolimigundla mandal. A total of 721 artists, including 72 students, performed in the two-day fete.

The Belum Caves Utsavalu – 2020 was held to promote the cave system, which is the largest cave system open to the public on the subcontinent extending about 3,229 meters. The event costed the government about ₹1 crore.

The festival concluded with the authorities giving out mementos to the winners in competitions. In the span of two days, rangoli, karrasamu, kabaddi, essay writing and other competitions were held.

Local MLA Katasani Rami Reddy, attended as the chief guest, and presented mementos to the winners along with district authorities.

Speaking on the occasion, Mr. Reddy thanked the district authorities and police officers for making the event a success. “It is a great feat that this huge an event was planned in such less time,” he added.

Prior to this, artists performed various classical and contemporary dances, enthralling the people.

The annual pilgrimage to the holy Amarnath cave shrine in south Kashmir concluded on August 15 in a subdued ceremony with about 3.39 lakh pilgrims offering prayers at the naturally-formed ice-shivalingam this year. With the arrival of the ‘Charri Mubarak’, the holy mace of Lord Shiva, at the Himalayan shrine on Shrawan Purnima on August […]

Odisha village stops use of manja to save birds

Since 2019, inhabitants of Gunthabandha, a village on the outskirts of Odisha’s Berhampur, have completely discarded the use of abrasive manja thread for kite flying to save sparrows and other birds of their area. They followed the rule this year as well. Thanks to their efforts, along with sparrows, the number of other birds seen […]