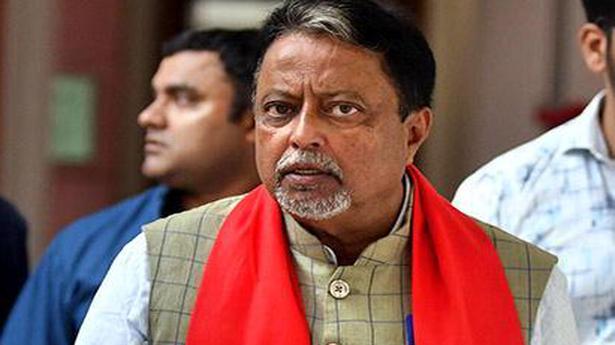 Satyajit Biswas was killed on February 9, 2019 while attending a public event during Saraswati Puja

West Bengal Police’s Criminal Investigation Department has filed a supplementary charge sheet in the murder of TMC MLA Satyajit Biswas where it has named Bharatiya Janata Party (BJP) leader Mukul Roy as a “ primary conspirator” in the case.

The charge sheet was filed before Additional Chief Judicial Magistrate in Ranaghat in the State’s Nadia on Saturday. This is the second supplementary charge sheet in connection with the crime, and charges against the BJP leader were brought under Section 302 (murder) and 120 B (criminal conspiracy) of the Indian Penal Code.

Earlier in March, Mr. Mukul Roy was questioned by the CID in connection with the crime, He has been granted anticipatory bail by the Calcutta High Court in this matter. Mr. Mukul Roy’s counsel Suman Roy said that so far five persons had been named in the charge sheet, including the BJP leader in supplementary charge sheet.

BJP’s Ranaghat MP Jagannath Sarkar has also been named in the first supplementary charge sheet filed before the Court in September 2019. There was also mention of Mr. Mukul Roy in the charge sheet but he was referred as a “ suspect” and specific charges were not brought against him.

Satyajit Biswas, the TMC MLA from Krishnaganj in Nadia, was killed on February 9, 2019 while attending a public event during Saraswati Puja. The development evoked strong reactions from the BJP. Mr. Mukul Roy defended himself, alleging the charges were “political vendetta”.

“The police cannot arrest me in this case. I have 44 cases against me. I have full faith in the judiciary. I want to ask who the Police Minister of the State is. It is at her insistence that my name has been in the charge sheet,” Mr. Roy alleged.

BJP leader Kailash Vijayvargiya also took to social media saying that “false allegations against Mukul Roy are an attempt to crush the Opposition”.

“Mamata Banerjee government is there for only few days. Mamataji should think what will happen after that,” the BJP leader said.

Congress president Rahul Gandhi on Monday described the party’s proposed minimum income guarantee scheme as “diesel for the engine” of the Indian economy. Mr. Gandhi promised to give government jobs to 22 lakh youths in one year, make 10 lakh recruitment in panchayats and said no farmer will be jailed for not repaying loan, if […]

Some of them also found pregnant Source: thehindu.com Related

Pakistan has said it was hoping for “re-engagement” with India after the Lok Sabha polls, noting that structured dialogue would enable the two countries to understand mutual concerns, resolve outstanding disputes and build the edifice of durable peace and security in the region. In an interview to PTI, Pakistan’s outgoing High Commissioner Sohail Mahmood said […]