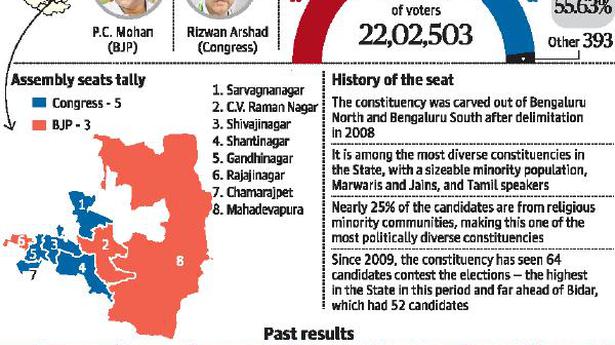 From swanky IT parks to slums and from commercial areas to premium residential hubs, Bengaluru Central Lok Sabha constituency presents a picture of contrasts. This segment is a Bharatiya Janata Party (BJP) stronghold despite having more Assembly segments won by the Congress.

It was carved out of Bengaluru North and Bengaluru South Lok Sabha constituencies in 2008. P.C. Mohan of the BJP won from here in both the 2009 and 2014 elections — the second time with a higher vote share.

Mr. Mohan, who is aiming for a third consecutive victory, is basing his poll plank on bringing the long-pending suburban rail project back to life, among other promises. But observers say it may not be a cakewalk for him.

The ‘cosmopolitan’ Bengaluru Central has a significant number of linguistic and religious minority communities, apart from being home to people from across economic classes. The challenges vary accordingly — from infrastructural interventions and solution to the traffic situation, to something as basic as ensuring regular drinking water supply.

Mr. Mohan will have a face-off with Rizwan Arshad of the Congress for the second time in the constituency. In 2014, Mr. Mohan had defeated Mr. Arshad by a margin of over 1.3 lakh votes. This time, Mr. Arshad, an MLC, has the support of Congress ally the Janata Dal (S).

Mr. Arshad is confident that the JD(S) support will help him get more votes. He believes he has an upper hand as Mr. Mohan “has failed to deliver on his promises and this has lead to resentment among people”.

Also in the fray this time is actor-turned-politician Prakash Raj, who is making his political debut as an Independent candidate. He has been conducting meetings with labour unions, women’s organisations, and residents’ welfare associations, making appeals in multiple languages, and pitching his candidature as an “alternative” politics that the country needs.

He has the backing of multiple organisations and smaller parties, as well as that of the Aam Aadmi Party (AAP), which has decided not to contest in these elections to ensure that “anti-BJP” votes are not split. In 2014, the AAP’s V. Balakrishnan overtook the JD(S) in Bengaluru Central and finished third.

Political analyst Sandeep Shastri says though the presence of Mr. Raj in the fray will cut into the Congress vote share, it is unlikely to be significant. “Those who are anti-BJP are likely to vote for the Congress as they feel a candidate fielded by a political party is better equipped to take on another candidate,” he says.

IAF helicopter lands near Srirangapatna after it develops technical snags

Three drown, more than 20 missing after boat capsizes in Bihar

At least three persons drowned while more than 20 others went missing after a boat carrying close to 80 people capsized in the Mahananda river in Katihar district, police said on Friday. Deputy Superintendent of Police, Barsoi, Pankaj Kumar said the incident took place on the Bihar-Bengal border at about 8.15 pm on Thursday night […]