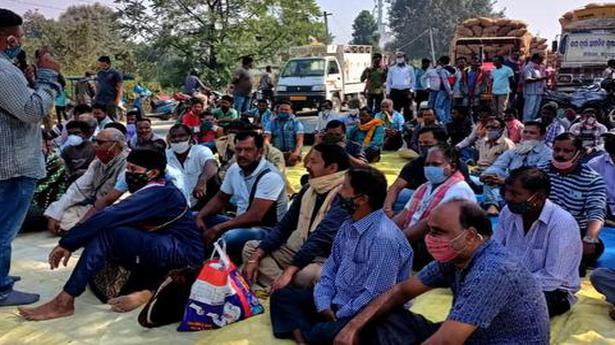 The response to the bandh call given by farmer organisations against three farm laws was total in Odisha on Tuesday.

With the bandh supported by the Congress, Left parties and various farmer organisations, normal life was affected across the State. Roads wore a deserted look as vehicles stayed off.

Protesters with their respective party flags were seen on the roads. In view of the bandh, the Odisha government had announced that offices would remain closed on Tuesday. Agitators also staged a rail roko.

At Mastercanteen Square, a central Bhubaneswar location, hundreds of farmers and members of the Congress, CPI (M), CPI and Samajwadi Party shouted slogans against the NDA government for bringing in the three Acts.

“The three laws passed by the Narendra Modi Government are black laws and against the interests of farmers. Our future generation will surely suffer due to corporatisation of farm sector. The government must repeal the Acts,” said Suresh Panigrahi, senior CPI (M) leader.

Members of Navnirman Krushak Sangathan, a farmer organisation, courted arrest in Jagatsinghpur district and on the outskirts of Bhubaneswar. Labour unions also lent their support to the bandh in the industrial areas of Rourkela, Kalinganagar and Rayagada. In the mining belt of Keonjhar and Sundargarh districts, trucks carrying iron ore could not move.

Siddaramaiah, former Chief Minister, said that recent history has shown that a united Opposition can easily defeat the BJP and the coalition partners in the State would go on to win at least 20 of the 28 seats in Karnataka in the forthcoming Lok Sabha elections. Interacting with mediapersons here on Tuesday, Mr. Siddaramaiah, who […]